Ben-To has one of the most gleefully stupid premises of a TV show ever. Every day in the local supermarket, the leftover bento boxes are reduced to half price. Their deliciousness and value for money is so prized by the local students that all-out brawls occur to determine who gets the honour of buying said bento. …And that’s about it. 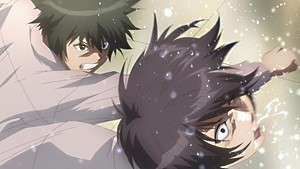 The idiotic premise is actually kind of awesome. It’s basically Fight Club meets Clerks, with a little bit of American Pie thrown in. In practice, this means that we have Yō Satō (Hiro Shimono), a high school freshman who stumbles upon this bizarre club which features fighters with pseudonyms like Monk, Wizard and Ice Witch, and quaint, time-honoured rules (the fight only begins when the supermarket staff member, aka the God of Discounts, finishes placing the half-price stickers and leaves the room, and that a fight is over the moment a fighter lays hands on a bento box.) Together with his friend, Hana Oshiroi (Aoi Yūki), an easily excitable girl who writes erotic light-novels in her spare time, Yō Satō negotiates this new world, getting to know the likes of Wizard and supreme fighter Ice Witch, aka Sen Yarizui (Mariya Ise).

The best part of about Ben-To is just how seriously it takes the whole scenario. The air inside the supermarket is thick with anticipation the moment the God of Discounts appears. Fists clench, sweat drips down brows and tummies grumble in hunger. Then, all hell breaks loose. The action is wonderful, and the discussions about tactics make it all the more exciting. The animation is fluid and the character models look great – but this is all par for the course with the stuff released in the west through Funimation.

Ben-To starts out strong, but by the time we get to episode 9, the wheels begin to fall off. “Fan service” is a longstanding issue with anime, not the least of which is the erroneous nature of the term to begin with, but Ben-To isn’t that bad an offender to begin with. Thing is, Yō Satō is a teenage boy, so it isn’t that hard to believe that he’s mainly obsessed with food and bewbs. Indeed, the only objectification is from Yō Satō’s perspective. And, like your traditional teenage sex comedy, he’s frequently punished/embarrassed in front of his peers for his libido and can’t seem to catch a break.

Once we get to episode 8, however, we’re clearly in exploitation-for-the-audience’s-sake mode. *sigh* Certain characters are posed bending over, the ‘camera’ lingering on anything but their faces. 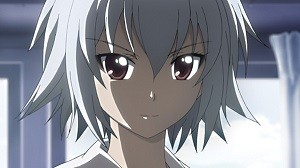 It’s disappointing because the show starts out avoiding such bad anime habit. This is joined by narrative inconsistency which remains until the end of the show, and to be honest the ending isn’t anywhere near as satisfying as one would hope.

The Blu-ray looks and sounds fantastic, and of particular note are a couple of audio commentaries by the English voice cast. One episode has a novel approach to the commentary by having cast members tell stories about the time they got into fights themselves, which is particularly entertaining.

Ben-To is an uneven show (with all the good stuff being in the first half) but entertaining enough. The comedy and the action works really well and the premise, making the extraordinary out of the mundane, is genius. It’s a pity it can’t sustain the level of quality throughout the 13 episodes, but if you want something a little bit different, then this series is the way to go.

Ben-To is available now on Blu-ray and DVD from Madman.