A perusal of Alex Garland’s biography reveals that I’ve liked just about everything he’s written, whether it be Sunshine, 28 Days Later… or even ‘Enslaved: Odyssey to the West’. In fact the only work of his that I have been fairly ambivalent towards would be, ironically, ‘The Beach’, the novel that catapulted him to stardom. After writing a string of great films, the most recent being Dredd, he gets to direct his debut feature with Ex Machina. 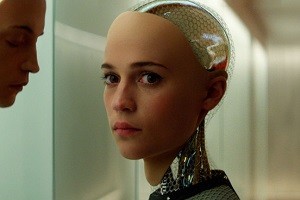 Domhnall Gleeson stars as Caleb, a young programming prodigy who gets the opportunity to work with gazillionaire genius, Nathan (Oscar Isaac). Nathan has developed what could be the world’s first artificial intelligence, and he needs a second opinion before taking the next step. What follows is a tense, claustrophobic thriller that is singularly focussed.

I’m not the least bit surprised that Ex Machina has a great script. What does surprise me is that Garland turned out to be such a great director straight out of the gate. There are effectively only three characters: Nathan, Caleb and the robot Ava, and the film plays out like theatre, consisting mainly of people standing in rooms, talking. Impressively, however, this never gets dull. The three performers are great, yes, but there’s a deftness to the direction, and a rhythm to the film that’s just right. This latter point is probably indicative of the fact that editor Mark Day has a heap of experience, not the least of which was the last few Harry Potter films.

Ava is played by Alicia Vikander, and if you remember my review for Testament of Youth, I’ve already stated that 2015 is going to be her year. She is brilliant here. When we first meet her, it feels as if we’re sailing very quickly into hetero male fantasy-land, but rest assured that the screenplay develops all the characters equally, and isn’t afraid to subvert expectations.

The visual effects that have gone into bringing Ava’s startling appearance to life are truly stunning. Whilst the filming conditions were clearly optimal – all on set, very little action and a camera that barely moves – it’s clear that Garland and his crew did everything possible during production to enable the incredible post-production work you see here. These effects put dozens of big budget Hollywood productions to shame.

There’s practically no criticisms I can send in Ex Machina’s direction. The script is faithful to the premise, and the film isn’t too concerned about what the audience may think they want. It’s a taut science fiction thriller that doesn’t put a foot wrong.