Sunshine, the latest collaboration between director Danny Boyle and writer Alex Garland (the duo responsible for 28 Days Later… and The Beach), joins a long tradition of science fiction films dealing with the pitfalls of space travel. Where it attempts to be a psychological drama in the vein of 2001 it succeeds admirably, but with one crucial misstep it falls below its potential. In the near future, Earth is slowly freezing due to a decline in the strength of the Sun, and a second mission to ‘restart’ our nearest star is underway. The first ship to undertake the journey, Icarus I, failed without explanation, and now the brave crew of Icarus II holds all hope for humanity in their hands. Their payload, a ‘stellar bomb’ (apparently containing all of the Earth’s remaining nuclear material), is to be released on the Sun to reignite its fires and bathe the Earth in warmth and light once more. The self-sufficient crew are forced into a difficult decision upon receiving a mysterious distress signal, and their gradual unraveling forms the basis of the drama.

The cast adequately fulfill their tasks, and Danny Boyle seems to have got the right people for the roles. The real surprise is the performance of Chris Evans as the engineer and antagonist Mace – he is a leader and inspiration, and Evans nails it completely. For anyone who had wondered if he really had the goods, Sunshine may just convince you. Cillian Murphy excels, and it’s nice to see Michelle Yeoh in another English-language film. Rose Byrne is a little weak as Cassie, and several of the lesser lights among the eight of Icarus II’s crew suffer for want of a little more development, but generally they perform well.

The change in tone that occurs after the initial setup may strike some as slightly clunky, but Boyle keeps the story moving along and at only 107 minutes he has been fairly restrained. The only major flaw is the choice made to allow external forces to play a part in the disintegration of the mission, as the build-up seems to suggest the psychological stress of being in a confined space with little chance of survival or success would be enough. Certainly, it feels somewhat artificial and unnecessary to provoke the outcome in the manner chosen. The cinematographic and editing techniques used in portraying this additional stressor are also somewhat distracting, but reasonably effective in allowing the focus to remain on the eight heroes.

Aside from occasional plot incongruities and the above-mentioned unfortunate dilution of the internal drama, Sunshine is a highly enjoyable and tense film which should satisfy most audiences. If only for one or two misjudgments, it could have been truly great.

You’ve gotta hand it to Danny Boyle and Alex Garland. They decided to have a go at a zombie movie, and created the brilliant 28 Days Later…, easily one of the best movies of the genre’s recent (ahem) resurrection. Next they decide to make a science fiction flick, and darn if it ain’t fantastic…

From the moment we’re introduced to the film’s most important character, namely Sol, we know we’re in for something special. I should explain two very pertinent facts at this point. Firstly, as a child I had recurring nightmares about tumbling through outer space, falling forever. And secondly I HATE the sun. Not especially because of global warming (though that sucks) but mainly cos I simply dislike the feeling of its rays on my skin. Thus, as an astrophobic vampire I was terrified at the very notion of Sunshine. That early scene where Searle (Chris Curtis) sits on the viewing platform in awe of our star as it fills the screen with a screeching, searing white light, was truly spellbinding. The sun, normally a giver of life, is seen as this ever present deadly threat throughout the film, and serves to remind us of our very precarious existence. 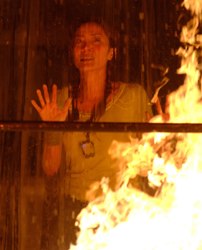 There’s nothing particularly original about Sunshine, excepting perhaps the vision. It manages to borrow from a whole host of science fiction films, from Event Horizon to Alien to 2001: A Space Odyssey, but it’s easily near the top of the heap.

The script is great, with very few moments of the bland exposition typical to mainstream sci-fi. I quickly forgave the obligatory voice over at the beginning as the characters were introduced in the most lifelike of fashions. There are no grand entrances, no big speeches. In fact very few of the actors have time to do what we traditionally recognise as ‘drama’ because so much crap is going down. The film is so claustrophobic, so relentless and extreme that I just wanted the characters to take time out once in a while and give each other a hug or something. But Garland doesn’t provide them, or us, with any respite from the chain of catastrophes that befall the crew.

I agree with Mark about the cast. This is a wonderfully varied bunch. I thought they all excelled, including Rose Byrne, who added a more human touch to the script which was full of decisions based on the greater good (perhaps THE greatest good, considering their mission).

The editing and cinematography, like 28 Days Later… is stunning. Editor Chris Gill, who has worked with Boyle previously, is a master of his craft, and thanks to him the film has a wonderfully staccato rhythm that somehow also seems organic.

Boyle has a patchy record (Millions and The Beach were pretty poor, and A Life Less Ordinary was a bizarre misfire), but when he gets it right he pretty much blows all the competition away. Hopefully this will turn out to be a year of edgy, intelligent sci-fi, as we’ve been treated to first Aronofsky’s The Fountain and now this. I just wish I hadn’t seen the second Sunshine trailer, which gave away a crucial plot element and ruined one of the more surprising moments in the film. Damn those marketing people! I look forward to the day they get their comeuppance. (I don’t know how, but rest assured that their time will come. Oh yes. That’s right, I’m talking to YOU, trailer editor of The Island… and you too, the one responsible for the Spider-Man 3 trailers, may someone ruin something your children’s children are looking forward to one day! Scum.)

←The Lives of Others Taxi Driver→