The Lives of Others bears more than a passing resemblance to Francis Ford Coppola’s oft-overlooked The Conversation, and it would surely have to share the mantle as one of the best films focussing on power and consequences of surveillance.

Set in 1984 before the fall of The Wall, East German secret police have a stranglehold on the population.

The script is very aware of just how absurd things can get in societies hell-bent on surveillance. The secret service begin the film simply scanning a theatre audience for possible anarchists. Those that seem to be squeaky clean are ironically those of which they are most suspicious. The film shares a little in common with Catch a Fire, insofar as hypersuspicious repressive regimes can actually inspire insurgents rather than quash existing ones.

Famous playwright Georg Dreyman (Sebastian Koch) is one of those chosen for full investigation. The secret police’s role is to monitor him 24/7 and record every minute detail of what goes on behind his front door. With such a close examination of someone’s personal life, it’s no wonder Hauptmann Gerd Wiesler (Ulrich Mühe) becomes a little more involved than he should.

The Lives of Others finds a surprising amount of humour in such dark times, and this perhaps lessens the film’s dramatic impact. It’s almost Hitchcockian, with its regular movements involving the traditional set-up and building of tension, and it’s wonderful to see such nervousness wrung out of such a sparse film.

The décor is horribly 80s, with wood panelling everywhere you turn. The streets are drab and grey and the filmmakers certainly went out of their way to show that East Germany was a depressing place to be. It also seems that all Stasi agents were ugly and the insurgents were sexy, so that could explain the former’s obsession on wanting to know what the latter were up to.

Though 137 minutes, The Lives of Others only feels about two hours long (which is still excessive in my mind), and its slow pacing may be a little too extreme for some. The ending isn’t as satisfying as the journey, but it’s a strong film all the same.

Skilfully striking the balance between satirising and demonising the pervasive, intrusive actions of the East German Ministerium für Staatssicherheit (Stasi), The Lives of Others is a masterful portrayal of the abuse of power and the dangers to the individual within the collective.

Introduced to the audience as an efficient, ruthless lecturer of future Stasi agents, Hauptmann Gerd Wiesler (Ulrich M&uuml;he) is the prototypical Stasi officer – he truly believes in his role as part of the ‘Shield and Sword of the Party’. 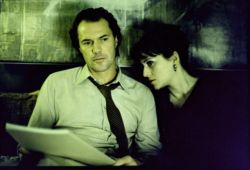 Forgoing a life of his own, he is dedicated to observing, documenting and critiquing the lives of others. This lonely (but safe) existence is to be forever altered by the jealousy of a government Minister, who hopes he will find evidence that the great patriotic playwright Georg Dreyman (Sebastian Koch) is in fact disloyal.

Perhaps the most impressive aspect of the film is the way director Florian Henckel von Donnersmarck places the audience in the same position as Wiesler – we are forced to endure the slow days and nights of observation, all the while noting the gradual changes in Dreyman as events force him to question not only his relationship with actor Christa-Maria Sieland (Martina Gedeck), but all he has believed of his homeland. As the Stasi become aware of Dreyman’s wavering, so do we, and yet the eyes of a Western audience are bound to be far more sympathetic to the object of observation as opposed to the observer. The conflict between our own instincts and the fact that we, the audience, are participating in the monitoring alongside the relatively sympathetic but ideologically repulsive protagonist Hauptmann Gerd Wiesler means a potent sense of unease gradually seeps into the consciousness. A remarkable effect indeed.

Balancing the dread of the horrors surely to come are moments of absurdity, astutely placed to relieve tension without diminishing the message. Not only are these pressure releases amusing, but thay adeptly satirise the situation in the DDR, adding yet more to the proposition of writer/director Henckel von Donnersmarck. (Pay attention though, for at least one such character has follow up later in the piece.)

The cast, led by Ulrich Mühe who is brilliant, is uniformly excellent, with no weak links identifiable. The set design, costuming and score all contribute to a sense of life in 80s East Germany, and that it won or was nominated in each of these categories at the German Film Awards is no surprise. As the winner of the Best Foreign Language film at the 2007 Academy Awards, it has received near universal acclaim, and in this case the plaudits are certainly deserved.

For those wishing for a fun-filled 90 minutes, the 137 of The Lives of Others may stretch things a little, especially considering the quiet and unhurried progression of the narrative. With the investment of time and attention, however, you will surely be rewarded by a film that adroitly investigates the role a single person can play (for both good or evil), within a construct that so discourages individualism.

The Lives of Others