The cards were always stacked against Cristophe Gans. His last film, Brotherhood of the Wolf (Le Pacte des loups) was easily one of the best action movies of the last decade, and miles ahead of its Hollywood counterparts. As a consequence his subsequent project was always going to have to be rather impressive to top it. Unsurprisingly, Silent Hill isn’t and doesn’t, though it is an enjoyable use of two hours. 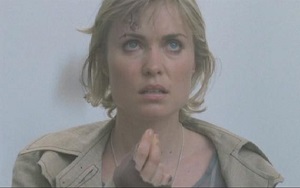 The first half of this videogame adaptation plays out like an extended Tool video clip. The surreal visuals are stunning, and whilst never believable, the macabre beauty of the deadly horrors is enough to keep one entertained. Unfortunately all the exposition comes in the last twenty minutes or so, and not only does this feel awkward, but the backstory’s a little hokey.

Poor Radha Mitchell (Melinda and Melinda) seems to keep missing the train to superstardom, and it’s not for lack of talent. She’s great as the driven mother of the missing Sandra, even if a lot of the film simply has Rose running around yelling her daughter’s name a lot. The casting overall is a little patchy. Alice Krige is brilliant as the cult leader, Sean Bean (Flightplan) does okay as Rose’s husband, and a rather boring Laurie Holden and Kim Coates don’t really bring much to the screen as a couple of cops. This is the type of film where the actors are really only present to take us from one special effects moment to another, and the CGI work in Silent Hill is pretty good without being jaw-dropping. The types of creatures appear one after the other, gradually getting more and more fearsome, rather like the progression one makes in a computer game. The crowning achievement of the film would have to be the mighty Pyramid Head, however – one of the best-loved bad-guys from the Silent Hill series. Though he has very little to do with the plot itself, his scenes are fantastic, and he’s easily the best bad guy I’ve seen on screen this year.

Silent Hill is overlong and relies far too much on special effects to tell the story, but the wonderfully nightmare-like tone makes for an entertaining if lowbrow horror. Whilst the film is never truly frightening, it’s nice to see that it doesn’t simply try to out-gross the rather sadistic horror movie trend of late, and saves the really vulgar stuff for the climax.