As discussed ad nauseum by critics and punters alike, the act of remaking a classic text for the screen, whether it be novel or play, is fraught with the risks of lazy comparison and unthinking dismissal. This by no means condemns those who attempt to rework the original and fail to succeed; rather, those who seek only to capitalise on the regard in which such texts are held, without any consideration of what is required in the art of film, should be condemned. This updated Macbeth fails to achieve the greatness of its source, however not through want of attention or effort. 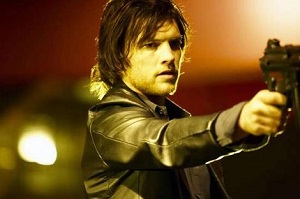 By setting this Macbeth in the underworld ganglands of modern Melbourne, Geoffrey Wright follows the long tradition of reimagining Shakespearean works in updated surrounds, and unfortunately, it never quite works. Much of the appeal of the play is in the downfall of a great man, and in this case, although Macbeth’s actions are heroic in their place, he could hardly be called ‘great’ and it is hard to care much for his outcome. Macbeth and Lady Macbeth are such tragic figures, and here they are somehow reduced, never allowed their greatness, and thus never truly tragic in their fall.

Events come at pace in this Macbeth, and with the addition of various expositional elements, the story seems rushed overall. Opening with Macbeth storming headlong through a barrage of death and destruction to win the day, the pacing of the film seems inspired by his frenetic entrance, with murder, betrayal, madness and death all coming one atop another, such that the rare moment of peace is generously welcomed. There never seems to be the time to absorb the significance of the events being portrayed, nor to consider their genesis or likely consequence, and thus much of the importance of the source is lost.

Aside from these criticisms, there is superficially much to like in Macbeth. The production is gorgeous, with lush costuming and set designs accompanied by wonderful lighting. The colours used in each of the techniques contribute to a sense of the extravagant lifestyle these crooks lead in their borrowed time, and the scenes with the Weird Sisters are particularly striking in this regard. The cast, lead by Sam Worthington and Victoria Hill, are uniformly excellent, although Gary Sweet is somewhat difficult to accept as Duncan the King and Matt Doran playing Malcolm takes some getting used to.

The action sequences are exciting and generally well shot, although the use of darkness (to great effect) occasionally makes some of the goings on more difficult to follow than they may have been. Macbeth never hides violence or its bloody aftermath, and in this respect, this film is not for the squeamish. Much as in Kill Bill: Vol. 1, however, the blood and gore contribute to the tone and the mood rather than seeming gratuitous.

Although, Macbeth is wonderful to look at, it fails to capture the essence of the greatness of Shakespeare’s original work, and thus disappoints. For those unfamiliar with his brilliant tragedy, Wright’s update will be an appealing introduction; all others may find it lacking in depth.

←Snakes on a Plane Silent Hill→