An original big budget sci-fi film in this day and age is certainly a pleasing notion. Sure, we sometimes get low budget gems like Arrival and Ex Machina, but for every Interstellar and Gravity, there’s at least a dozen sci-fi sequels. John Spaihts’ script for Passengers was on 2007’s Black List, and the ten year wait gives you an indication of just how hard it is to make these things. Basically, it needed box office heavy-hitters Jennifer Lawrence and Chris Pratt to finally get moving. And there’s no denying, these two are strong performers. Well, she’s excellent; he’s merely sufficient. But the thing is, it’s the script and direction that lets down the film. But I’m getting ahead of myself… 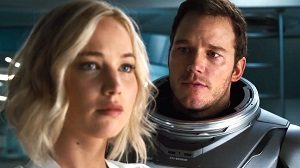 Pratt plays Jim Preston, a passenger on a spacecraft who awakes from cryosleep way too early. There’s been a malfunction and he’s not going to live to see the new colony that’s their destination. To say much more would be spoil the film.

In my opinion, the best stories set up impossible odds, and then somehow succeed in getting their protagonists through them. I talked about this on the Stranger Than Fiction episode of Chatflix podcast.  In Passengers, Spaiht’s script certainly offers such a obstacle; it’s just that he doesn’t succeed at rising to the challenge. It’s a pity, because the first two thirds of the film are pretty darn good. Our two leads are strong, the production values are impressive, and the pacing is deliberate yet never sluggish. The third act is another story, however. Here, the narrative feels rushed, and the story decisions fall frustratingly short.

Another bugbear: the score is terrible. I can’t remember the last time I saw a film with such a distracting and overbearing soundtrack. It felt like it was signposting every scene, telling me how to feel. I was surprised to learn Thomas Newman was responsible, a guy who has so many decent scores under his belt. Maybe it was a mixing issue…maybe his cuts were chopped and changed without his permission. Either way, it didn’t work at all.

Strangely, I’m not certain Morten Tyldum’s direction was all that great either. Assuming that the film hadn’t been taken off him in post, then there are a number of scenes that lack the dramatic punch they deserve, despite Lawrence and Pratt’s best efforts.

I used the word frustrating earlier, and that really sums up the film. It’s almost there. On the way home, my wife and I came up with a couple of options for the final act, both of which were better than what we saw. In the end, the film just sets itself too big a challenge.