Ever since I read the book 13 years ago, I’ve been eagerly awaiting a film adaptation of ‘Gerald’s Game’. Safely my favourite Stephen King story of all time, I knew it had the potential to be a great film. Sure, it wouldn’t be an easy task, but I felt that someone could do it justice. 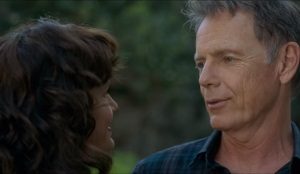 Thankfully, Mike Flanagan was the man for the job. His adaptation (co-written by Jeff Howard) stays true to the source material whilst making alterations that clearly had to happen with the change of medium. But above all else, it’s clear that Flanagan is a huge fan of the book, and King’s work in general.

As we know, King’s done every story at least twice (see also ‘Christine’ and ‘From a Buick 8’) so on the surface, Gerald’s Game is similar to ‘Misery’, in that our lead character is bedridden for the majority of the story. Carla Gugino plays Jessie Burlingame, wife of Gerald (Bruce Greenwood). As the film starts, they have retreated to their holiday house in the hopes of healing their failing marriage. Initially intending to spice up their love life with a little bit of bondage, Gerald happens to drop dead at the worst possible moment, leaving Jessie handcuffed to the bed. And this is how she spends the rest of the film.

Since the majority of ‘Gerald’s Game’ plays out in Jessie’s head, depicting her mental struggle was always going to be the challenge of any adaptation. In this department, Flanagan’s film excels. By having imaginary versions of herself and people from her past appear, Jessie is able to have conversations instead of merely talking to herself.

Gugino is excellent as Jessie. I feel like I’ve only seen her in supporting roles before, and it’s great to see her let loose in an extremely challenging role. Greenwood is great also. The film doesn’t shy away from the most shocking parts of the book – including that one moment of gore – and it handles the darker and more serious topics reasonably well too.

The cinematography is excellent. The camera uses the setting to the fullest effect, whilst there are some genius moments of lighting that really sell the eerie parts of the story.

King fans can rejoice, for Flanagan’s film is up there with the best of King’s work. For those who are wondering, he even included the link to that other King story. Most importantly, it’s restrained when it needs to be restrained, and doesn’t hold back when the tale reaches its crazy zenith. You could argue the film stumbles during the final act, but again, that’s true to the novel – I know quite a few people that feel that way about the book also.

All in all, it’s been worth the wait.