Knights of Sidonia was a series that passed me by when it first became available, but now with Madman’s release of the entire show on DVD, I’ve watched it from start to finish. 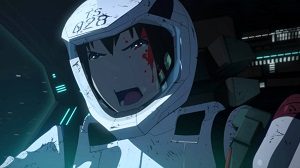 Set on the massive “seed ship”, the Sidonia, the series sees the remains of humanity deserting Earth after devastating attacks by the alien Gauna. The interior of the ship features thousands of houses all clustered together in vertiginous towers, closely resembling the architecture of the “Gravity Rush” game series. The massive Gauna entities regularly attack the ship, so the specially trained knights are sent out in their Gardes – mechs to you and I – with their Higgs-particle cannons and specially-designed Kabizashi lances for close combat.

Basically, we have Kaiju, we have mechs, and we have a bunch of clichés we’ve seen before. It’s hard to ignore the particular similarity between Knights of Sidonia and Attack on Titan, however. Sidonia’s source material began publication in April 2009, and the AoT manga began in September 2009, whilst AoT beat Knights of Sidonia to the screen, with a series beginning in April 2013. Regardless of which came first, it’s clear that they are aimed at similar audiences. With one exception…

Knights of Sidonia’s biggest flaw is that it’s clearly aimed at straight teenage boys…and no one else. We have the usual situation where the young male protagonist (Nagate Tanikaze, played by Ryōta Ōsaka) is the only person who can defeat the enemy, but then they surround him with female characters who are all desperately in love with him. There’s one scene where three of them are literally falling over each other to get to him. The show has no qualms about its status as a straight teenage boy fantasy. (And I’m not even getting into the amount of phallic symbolism that features in the show…)

Even worse, the female characters are constantly damselled. Just about every time one of the women suits up in their Garde, you can be certain that they’ll need rescuing. It’s tiresome and predictable.

The show also dabbles in the idea of a future society that isn’t bound to the gender binary. There is “third” gender that we meet in the very first episode. Unfortunately, it doesn’t do anything really interesting with the idea, and the idea slowly loses its significance as the show goes on.

So what’s good about Knights of Sidonia? Well, the production values will knock your socks off. 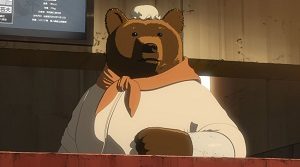 There’s a lot of 3D animation, but rest assured that the technology has progressed a long way since 2006’s Freedom. There’s enough high-octane action set pieces to keep everyone happy, and strangely enough this isn’t offset by minutes of introspection by the characters (unlike the aforementioned Attack on Titan, which clearly balanced its expensive animation with cheaper scenes.)

The show has another ace up its sleeve too, and that’s the sound design. Knights of Sidonia will make your neighbours think you’re listening to dubstep, such are the bass drops that explode through your subwoofer. The sound effects themselves are instantly iconic too, rivalling the work of Ben Burtt in Star Wars. The DVD has a 5.1 mix in both English and Japanese, and the picture quality is exceptional, such that it looks great on an HDTV, unlike your older DVDs…

Series 2 has the narrative change gear, with some plot revelations that continue to be eerily similar to that other extremely popular anime of the moment. And once you get to climactic end of the season, be ready for an epic three-episode long fight that’ll have you on the edge of your seat, despite your misgivings.

Watch Knights of Sidonia for the incredible production values, the top-notch action sequences and the great setting. You’ll have to turn a blind eye to the disappointing writing of the female characters, though.

Knights of Sidonia Complete Series is available now on DVD from Madman.