I worry for the teenage girls of the world who look up to Bella Swan, a stubborn, single-minded girl who defines herself only through the boy(s) she loves. Decades of feminism seem to have had no effect on Stephanie Meyer’s twilit series. The girls are helpless, emotional creatures who seem to think it’s a good idea to fall in love with boys who can be and are violent towards them. About the only positive part of New Moon in this regard is that all the guys walk around topless, yet the girls aren’t sexualised at all, which is a nice change.

Catherine Hardwicke’s direction was one of the few things that saved Twilight. Kristen Stewart is still far and away the strongest performer of the franchise. She makes me almost care about Bella in a way that the books never could. Sure, Stewart’s furrowed brows and trademark grumpiness may be getting a little tired now, but she’s clearly the best actress that could have been cast in the role. As most will know, vampire Edward (Robert Pattinson) spends very little time in this film, using a feeble excuse about leaving her alone so she can lead a normal life. As a result, Bella is left in the overcast town of Forks with Jacob (Taylor Lautner), the buff and brash equivalent of Edward’s moody (read: whiny) detachment. Blessed, as I was, with the knowledge that the Powers That Be threatened to strip Lautner from the role unless he pack on 13 kilograms, it’s a little disturbing to see how he’s changed (and feels a teensy bit like child abuse, really). Bella’s actions, like much of the franchise, seem inherently selfish in New Moon, whilst the dumbstruck boys continue to orbit around her. Perhaps most disappointing is the fact that the climax is a bit of a fizzle, even if Michael Sheen lights up the screen with his portrayal of head vamp, Aro.

Whilst the direction may be less accomplished, the film at least has a decent budget this time around. Where Twilight was filled with awful special effects, New Moon manages at least to get by with some nifty action sequences. Actually, the film has a couple of top moments, assisted by great cinematography, perfect editing and a great soundtrack – it’s a slicker flick for sure. No one could deny that the first instalment had a great soundtrack, and this one is even better.

New Moon sticks close to the source material (to its detriment, naturally) and as such should keep fans of the books happy. It’s entertaining in a mindless way, though a step down from Twilight. The third film, Eclipse, will no doubt appear hot on its heels, and I suppose one should be grateful that the series thus far has proven to be reasonably entertaining, given that the whole franchise feels like such a rush job.

Excuse me, while I dust off the cobwebs and wake up a little… okay, that’s better. Now we can discuss this travesty of a film that will set any number of undeserved box office records and win the hearts and minds of teen girls from Forks, Washington, to Spoon Slip, New Zealand.

When Bella Swan (Kristen Stewart) last finished moping about for two hours of screen time in Twilight, Edward (Robert Pattinson, the ‘good’ vampire in bad makeup) had saved her from the clutches of the ‘bad’ vampire and won her heart forever. 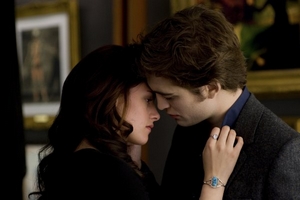 Now eighteen, she cuts her finger at Edward’s family celebration of her birthday, unwittingly forcing Edward to choose between continuing to expose her to the danger of hanging around a bunch of bloodsuckers and going away forever. Meanwhile, Bella’s old friend Jacob (Taylor Lautner) is now buff.

I am not a teenage girl. I acknowledge that upfront. Neither am I a teenage boy, young woman or in love with a vampire. Perhaps this makes my criticisms of New Moon moot – its audience is already assured, and the critical panning the film has received is falling on deaf ears. My failure to fall within the target demographic of the film does not, however, preclude me from pointing out that it is a clusterfuck of bad scripting, characterisation and plot, such that it goes close to the worst film I’ve seen this year.

For a film that focuses so intently on the emotional and romantic trials of an eighteen-year-old girl, New Moon may do more damage to the concept of female empowerment than one can even imagine. Its heroine, Bella Swan, is so remarkably and pathetically passive, one wonders how she manages to get out of bed without help. In fact, Chris Weitz’s film contends that she won’t leave her chair for months, preferring to simply stare into the woods and hope that her dreamy vamp-boy will come back to save her.

As Stuart mentions above, Bella’s entire existence is defined by the boy she’s snogging (I wanted to say shagging, but they don’t do that in Forks, apparently). She is happy to accept the violence and abuse so prevalent in the worlds of Edward and Jacob, not even flinching when she meets the disfigured but still in love fiance/victim of one of Jacob’s friends. What kind of message is being sent to young women here? The film barely stands up to scrutiny, and perhaps isn’t meant to be considered in depth, but as it takes itself so damn seriously it demands the audience does as well. Perhaps the only positive message its audience will receive is the SunSmart concept that it’s okay to be pale.

It may be this sense of self-importance that does most harm to the film, however, as it is filled with tedious, pseudo-meaningful pauses and sweeping musical interludes – it frequently feels like a two-hour-long video clip, what with the slo-mo running through the woods and moody indie soundtrack. 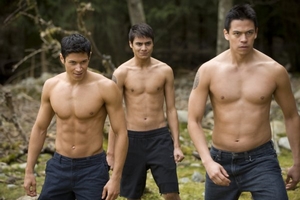 That the song playing over the final credits features a recurring lyric of ‘everything ends’ is ironic, as any sane viewer would have been hoping that was true long before. One wonders how those audience members would feel if anything had actually happened in the preceding two hours.

Given the abject failure of the writers to include anything remotely interesting for their characters to do, the actors are forced to spout ‘important’ lines about life and meaning and souls, and none convinces in their performance. Stewart is dull in the lead role, a shame given she was rather magnetic in the first Twilight film, while Pattinson is lumbered with perhaps the most boring character in the history of film. Lautner gets to walk around a lot without a shirt and looks the part, and probably gives the best turn of the three. Their ‘love triangle’ must win some award for containing the least romantic tension imaginable, however, while their dialogue contains lines that can only represent the ridiculous fantasy of pre-teen girls about what their dream-guy will say to them to sweep them off their feet. Supporting cast are reduced to cardboard figures that can be moved on and off set whenever suits.

The astronomically dull film that is The Twilight Saga: New Moon will soon be followed by The Twilight Saga: Eclipse, and then finally by The Twilight Saga: Breaking Dawn, which is apparently going to be filmed in two parts, Harry Potter style, to capitalise on the pocket money of teenage girls everywhere. One can only hope Stephenie Meyer will choose to put down her pen, and save the rest of us from her absurd fantasies while releasing her audience to go and find out what being in a real relationship actually takes.