A lot of people groan when they hear about a new ‘found footage’ film, but I realised just the other day that it’s a genre I’m quite enamoured with. The Blair Witch Project, The Last Exorcism, Cloverfield, Paranormal Activity 1 and 2 – I enjoyed them all immensely. In fact, the only one I can think of that I didn’t appreciate was Diary of the Dead, but I haven’t liked anything Romero’s done for decades now. (And I suppose I didn’t really dig Cannibal Holocaust either, for that matter. But does anyone really ‘enjoy’ a film like that?) 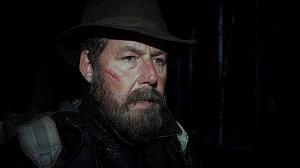 The latest entry into the found footage genre is Norway’s Trollhunter. It follows a trio of film students who are investigating some mysterious bear deaths. The local hunters are sure something fishy is going on, and several of them speak of a mysterious bearded fellow in a Land Rover who always seems to be nearby when another dead bear is discovered. Our film crew follow the man for some time, and it’s clear that he’s hunting something much… bigger… than bears.

This rollercoaster ride of a film is basically Blair Witch meets Cloverfield. The major difference would be that the narrative isn’t too concerned with our young heroes. Otto Jespersen’s trollhunter Hans is clearly the focus of the film, and his performance is side-splitting. He’s a gruff, world-weary type who feels like just another downtrodden public servant, having to fill out a tonne of paperwork and never getting paid for the extensive overtime he puts in. The script is hilarious yet, like Hans, it always keeps a straight face. The three young filmmakers are convincingly played by Glenn Erland Tosterud, Johanna Mørck and Tomas Alf Larsen, but there isn’t much character-based drama for them to sink their teeth into. This is perhaps a flaw, though the footage itself is so entertaining that it never really matters.

As far as handheld footage goes, Trollhunter’s pretty good. I did make sure I sat up towards the back of the cinema so as to ward off any potential nausea, but unlike Cloverfield, this film remembers that frantic shakycam needs to be broken up by regular, steady shots to ensure that the footage never becomes too dizzying. The film occasionally cheats with the footage, edited so as to more closely mimic a reverse/obverse scene, but nowhere near as much as The Last Exorcism, in which a mysterious second camera seemed to keep popping up.

Trollhunter is a wondrous blend of fantasy, comedy and horror, and manages to be about a creature that rarely appears in monster movies. When we get to see the giant creatures in all their glory, the special effects are perfectly handled. The beginning of the film is a little too heavily edited – the film jumps about in an attempt to get the ball rolling – but thankfully towards the end we get some great drawn out action scenes. Trollhunter is a must for horror and fantasy fans.