No, you’re not losing your mind – Diane Keaton is again playing the overbearing mother, insinuating herself in offspring’s day-to-day activities. If you didn’t like Because I Said So, then you mightn’t want to rush out to catch this one. 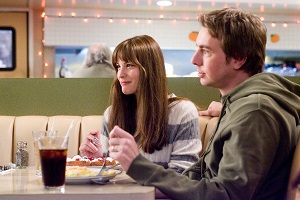 Smother is generally entertaining once you get over the sense of déjà vu. Dax Shepard has yet to show any particular charisma in his feature outings (Let’s Go to Prison, Without a Paddle), and here he is acceptable, if a little lacking in charisma. Not only does Dax’s Noah Cooper have to deal with losing his job, but also with his hyperactive mother and his wife’s loser cousin whom have both moved in. His wife Clare (Liv Tyler) is loving and supportive, but also determined to conceive a child, and Noah doesn’t seem quite as enthusiastic.

Yes, the characterisations are lazy. Guess what? The man in this romcom is immature (oh my god, really?), and the woman is obsessed with becoming a mother (egad! Such ingenuity!). We’ve seen it all before, but the performances do have a certain charm. Tyler is good in a fairly limited role, but deserves better. It’s particularly unsettling after seeing such a great portrayal of a desperate mother-to-be in Then She Found Me. The supporting characters are a little hit (Mike White as cousin Myron) and miss (Jerry Lambert as Noah’s new boss, Ken Howard as the latter’s father). Throw in just a splash of inappropriate sex humour, and you have an entirely contemporary, by-the-numbers romcom.

Don’t expect any revelations hidden in the wings, waiting to spring out in the final act – there’s nothing new here. It’s a bit of a crowd pleaser, and Diane Keaton is clearly having fun. I understand that actresses her age have trouble fitting into Hollywood’s fairly age- and gender-biased traditions, but she should really know better.

If you’re determined to see this flick, feel free to wait for DVD. Thankfully we’re spared from too many over the top antics. No one’s acting like the cast from What Happens in Vegas…, and the random toilet humour is kept to a minimum.