My significant other’s favourite Disney animation is 1959’s Sleeping Beauty, so this film was always a must see for our household. (For my part, that same animation is probably best-looking Blu-ray in our collection; one of the most amazing restoration/transfers I’ve ever seen.) The question was: would this modern retelling of a fairy tale be lost in the extravagant budget and digital effects that overwhelmed the likes of Alice in Wonderland and Oz the Great and Powerful? 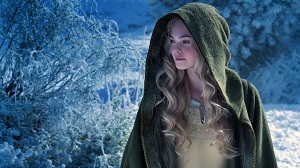 For the first half hour, the answer is yes, unfortunately. Bucket loads of cash have been thrown at the screen, and the actors never look comfortable on what I can only imagine was a mostly digital set. To make matters worse, the first section of the film covers decades of Maleficent’s life in what feels like an endless montage. Starting a film in this manner is always a difficult task, as the audience is being held at arm’s reach with very little time to get to know the characters. For that first half hour, it feels like we never get a scene of more than a minute’s length.

Then, with the arrival of baby Aurora, the film suddenly gets better. A lot better. This is because we have actual scenes, rather than cherry-picked moments from someone’s life. The actors are given room to breathe and we can start to feel for Angelina Jolie’s Maleficent.

Broadly speaking, this revisionist version of a story we all know well is brilliantly handled. The shades of grey are quite surprising for a Disney family film, and whilst we aren’t watching ‘Game of Thrones’, there’s definitely some good and some bad in Maleficent. Linda Woolverton’s screenplay is wonderfully subversive in the tradition of Gregory Maguire’s ‘Wicked’, and it will definitely make you think twice about the motivations of the king next time you watch Sleeping Beauty, even if that film had no hints of any ulterior motives. By the time we get to the climax, Maleficent really knocks it out of the park. It’s just such a pity that the first act is so dire. I suppose it’s better than being the other way around, but still, it’s hard to grade a film like this.

Elle Fanning is fantastic, and by far the most adept at acting alongside digital creations. Jolie is good yet really flails about during that first half hour, where it’s hard for her to make an impact during a 30 second scene where she only gets one line. The moments with Aurora and Maleficent together on screen are easily the best, and this is where the film feels the most successful.

The trio of fairies, played by Lesley Manville, Imelda Staunton and Juno Temple, don’t work well at all. It doesn’t help that, when fairy-sized, the visual effects department plopped their real heads on CGI bodies, culminating in some awful body horror-type uncanny valley effect. Sharlto Copley proves he really is a master of disguise as Stefan, but he doesn’t leave that much of an impression.

For fans of Sleeping Beauty, this is a must. I don’t think it would have quite the impact, however, if you haven’t seen the more traditional take on the story. An uneven film, with an almost unforgivably awkward opening act, it manages to redeem itself rather spectacularly.

←The Rover How to Train Your Dragon 2→