This is another of those interesting films that doesn’t deliver on its trailer’s promises. It is in fact a very, very good film. Just not what I expected.

If you’re anticipating an hilarious offbeat black comedy with assassins, you’ll be disappointed. In Bruges is funny, but only sporadically. Most of the film is actually quite a sombre affair, and one that’s more than a little tragic.

The main joke, of course, is that Ray (Colin Farrell) thinks that Bruges is a bit of a hole. He and his co-worker Ken (Brendan Gleeson) have been ordered to lay low in Belgium until the heat dies down back in England, where Ray’s last job didn’t go as planned. It begins as an odd couple comedy, but we soon see the more sentimental sides of these hit men. Ray may be at the beginning of his career, and Ken well past the point of no return, but they both share a sadness that springs from being unable to reconcile their position in the world. Whilst in Bruges, they meet several locals who will push the narrative in various directions, but it’s Ray that’s the central character. Farrell imbues him with such sympathy that your heart breaks when things don’t go his way, but he’ll just as soon make you laugh with his random acts of drug-fuelled violence.

The city is of course beautiful. I’m not sure if I’ve ever seen Bruges on film before, but it’s stunning in this flick. I can imagine the film will easily boost the town’s tourist trade. The cinematography captures the city perfectly, and Carter Burwell’s soundtrack is easily the best I’ve heard all year. At first it’s rather unobtrusive, but once the shit hits the fan it truly erupts, and is an incredibly effective complement to the performances.

Ralph Fiennes proves once again to be a master of his craft, playing Ken and Ray’s boss. Harry is so tightly wound that you wouldn’t be surprised if he explodes in violence at any moment, even if he is the most principled character in the whole film. Speaking of violence, the film is a little grisly at times. Whilst never gratuitous, it certainly doesn’t shy away from truthfully creating the type of blood and gore that would result from such acts.

In Bruges is a fantastic film that focuses almost entirely on character development when other films might be more concerned with pacing. As such, it might be a little dull for some, but anyone who doesn’t go the distance would be missing out. Highly recommended.

In many ways the marketing of a film must be almost as hard as its making – I’ve commented previously on the difficulties faced by those who make trailers, and In Bruges is a new example of how a trailer can mislead. Sold to audiences as a laugh-a-minute crime caper it very quickly becomes evident it is nothing of the sort, but what it is is something wonderful.

Sent to Bruges (in Belgium) to hideout after a job goes horribly wrong, odd couple colleagues Ray (Colin Farrell) and Ken (Brendan Gleeson) see their momentary exile in remarkably different ways – Ken is keen to experience the remarkable beauty of the medieval town while Ray wishes only for a pint or to return to London. 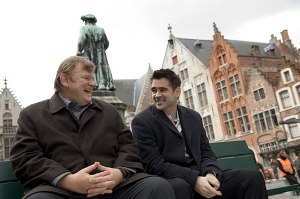 With the precipitating event later told in flashback, it will become clear why Ray is so prone to crying for no apparent reason, although the nature of the relationship between the two men is never clearly defined. After their boss calls and it is clear what is required of each of them, an often hilarious and frequently moving sequence of events is unleashed that will intertwine a host of minor characters in the fate of the anti-heroic leading duo.

As Stuart mentions above, it is the focus on character that sets In Bruges apart from so many of its peers. Ray and Ken are so efficiently developed and yet so brilliantly made flesh that the audience is compelled to take their side. When that is contrasted against the self-evidently appalling nature of their work (and particularly the act that led to their trip to Bruge), the resulting sensation is an exquisite psychic conundrum.

The supporting cast are excellent, with Ralph Fiennes particularly standing out in a role brimming with menace and wit. He seems to be revelling in the freedom of playing a foul-mouthed crime boss, and is lucky to be blessed with a character worth begging for. Clémence Poésy – last seen in Australia in Harry Potter and the Goblet of Fire as Fleur Delacour – enables much of the lighter side of Farrell’s Ray as the whip-smart hustler Chloë.

The film moves at a languid pace that seems appropriate for its setting, utilising the true beauty of Bruges to great effect while imbuing the experience with a sense of make-believe that perhaps allows the violence that comes to be even more shocking. While many may feel it slow, the time spent getting to the climax is just as important as the final scenes themselves. The great intelligence of the writing and direction belies the fact that In Bruges is the first feature film for writer/director Martin McDonagh (although he is an Oscar winner in the short film class).

With almost perfect balance between suspense thriller and comic relief, it is clear that McDonagh is a filmmaker to be watched. Although demonstrably dark in tone, there is enough to lighten the mood with often self-aware and intentionally ironic humour within that provides counterpoint to the tragi-heroic events in which Ray and Ken are caught up. Bravo.

←Angus, Thongs and Perfect Snogging The Girl by the Lake→