Judging a film like Harry Potter and the Deathly Hallows: Part 1 by any standard or common sense set of criteria just won’t work: when a story is split into two separate films for no higher purpose than to cynically bilk the movie-going (and dvd-purchasing) public out of their hard-earned cash, it becomes irrelevant how well written or produced it is. This decision is the fundamental, unifying problem that ultimately betrays the film.

In the final installment of J.K. Rowling’s beloved series, the magical world is undergoing the greatest upheaval they could imagine. Dumbledore has died, the Ministry of Magic has been usurped, and Lord Voldemort and his Death Eaters reign supreme. Harry, Ron and Hermione escape certain death to a nomadic lifestyle, one that gives them plenty of time to try to figure out how to destroy Voldemort’s horcruxes.

For many viewers, the simple fact of having access to a screen version of their favourite novels will be enough: there is a certain charm to Rowling’s three lead characters that persists despite the often dull adventures she has inflicted upon in them, particularly in the latter books. For those viewers who queued in 2001 for Harry Potter and the Philosopher’s Stone, Parts 1 & 2 of Deathly Hallows will mean they’ve spent nearly a decade with Radcliffe, Watson and Grint. In many cases, those viewers will have grown up with them as close friends.

This gives Deathly Hallows: Part 1 an advantage that can’t be underestimated. One imagines many fans will love watching this tryptych wander (disapparate, whatever) throughout the cold British Winter, and love the hinted-at chance of a chaste love triangle. The fact that this is a 146-minute epic in which nothing really happens might just elude them, but for others this will be inescapable. 146 minutes of aimless wandering and petty rivalry, wrapped up as something with meaning? Hardly. Nagini flying here, walls blasting there, characters thrown this way and that: the failure to allow the audience to appreciate what is actually happening sums up Yates’ approach to the other action sequences. Broomsticks whiz and curses shoot out of wands and usually no-one can tell who is shooting at whom.

There are aspects that succeed, including Watson’s performance as Hermione which stands out among her colleagues’s turns. The production design is wonderful, and the CGI character animation – particularly of the house elves – shows just how many years have passed since the rather laughable attempts in the earlier films.

Perhaps the greatest casualty of the decision to split this film in half is the loss of meaning. Two and a half hours of wandering is intended to inform us that lives are at stake, and the deaths of certain major characters punctuate the time but mean little. How can the death of Hedwig barely be worth a second thought? Would Harry be so unmoved by the loss of his longest and most loyal companion, a bird he has owned since the moment of his wizarding awakening? Human characters meet their end with almost no note made of their contribution or passing. Perhaps time can be allowed for grief after the war ends in Part 2, but this leaves Part 1 – perhaps unintentionally – cold.

Revisiting this film after the release of its successor might allow viewers to see it with a kinder eye, but as a film that stands in its own right, Harry Potter and the Deathly Hallows: Part 1 is nothing more than grossly disappointing.

As the Harry Potter phenomenon reaches its conclusion, it kind of feels like the franchise is dragging its feet, what with the splitting up of the last book into two films. Warner Brothers was clearly reluctant to finish up their very lucrative property, so thus we get Part 1 of The Deathly Hallows before having to wait half a year for Part 2.

This decision works both for and against the film. First of all, this outing never feels rushed – something that several of the earlier films had a problem with. Something I really enjoyed about Harry Potter and the Half-Blood Prince was that it was never in a hurry. Whilst I appreciate that kids might find The Deathly Hallows pretty boring, it’s great to see a kids’ fantasy film that isn’t simply two hours of disorienting CGI and explosions. However, the flip side of the splitting up of the narrative is that of course Part 1 doesn’t have a proper ending. There is a climax of sorts, but the ending certainly can’t escape the fact that it’ll leave audiences a little disappointed.

This should really have been called ‘Harry Potter and the Camping Trip’ because that’s basically what happens. 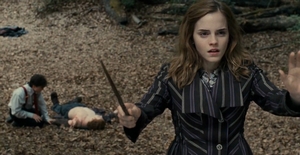 Harry, Ron and Hermione eschew the rest of the world, share a tent and get on each other’s nerves a lot. This may sound like it makes for extraordinarily dull viewing, but I for one quite enjoyed it. It means, of course, that the film’s strengths lie pretty much on the shoulders of these three young thespians. They’ve been in the game for ten years now, so it comes as no surprise that they handle the material wonderfully. Where the last film veered into angst, this one has the three wallow in misery, so it’s little surprise that the Deathly Hallows is rather downbeat. If there were any parents out there who weren’t familiar with the books, they might be surprised to learn that their kids are spellbound by what is a very slow-moving, gloomy film.

As Mark has said, Watson stands out as the strongest performer of the three, though to be fair I always found the literary iteration of Harry to be lacking in genuine emotion, so it’s difficult to give Radcliffe a hard time for his role. Never mind the fact that our hero doesn’t spare much of a thought for Hedwig – what about Ginny? After a quick pash at the start he never mentions her – apparently too self-involved to worry about what I can only assume is supposed to be true love, and not just a crush of convenience (being BFF with her brother and all).

It’s a pity the series went so dark as early as The Prisoner of Azkaban, because it really left the filmmakers nowhere to go now that the wizarding world’s gone to shit. If anyone were to sit down now to watch all the films in a row, I imagine that the first two would feel completely out of place in comparison to their sequels.

The production values are nice, though I’m getting a little sick of every special effect being surrounded by darkness. Whenever the camera pulls back for a nice big effects shot, the scenery is forever ringed by blackness. The film does get bonus points, however, for a stunning animated sequence that is (visually, at least) the highlight of the film.

I enjoyed The Deathly Hallows: Part 1, I really did, but it simply cannot escape the fact that, in isolation, it doesn’t really make for a complete cinematic experience – it’s more like an episode of a miniseries. If the alternative was a three hour, frenzied adaptation of the entire book, then I suppose this was the better option, but you can be certain that once the DVDs of both parts come out people will simply watch them back to back, anyway.