There’s nothing I hate more than a writer who’s officially Made It, only to have their output slow to a trickle. J.K. Rowling could have easily fallen into this trap after her Harry Potter books, and then subsequent adaptations, made gazillions from audiences around the globe. But, to her credit, she’s written more books since then, collaborated on a stage play and now written this feature film, set 70 years before the Harry Potter stories. 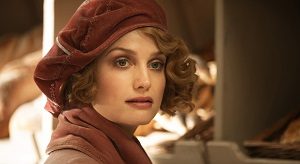 Newt Scamander (Eddie Redmayne), author of the titular book, is the focus here. He spends his time capturing and cataloguing the weird and wonderful beasts that exist around the corners of reality. When he finds his way to New York, he inadvertently clashes with the local wizarding community, including Colin Farrell’s Graves, Katherine Waterston’s Tina and Samantha Morton’s Mary Lou. The cross-Atlantic culture clash is something that the film dabbles in, but ultimately never takes anywhere. The story doesn’t take advantage of the period setting either.

The movie is, however, filled with fascinating characters. Waterson and Alison Sudal play sisters, Tiny and Queenie, and they’re a captivating pair. In fact, I’d prefer if the film had been about them. Scamander, on the other hand, is one big pile of dull. Redmayne may well have won an Oscar, but here he’s simply a charisma vacuum. There’s no depth to be found here. He’s socially awkward, sure, but I didn’t get a sense of the baggage he was carrying (other than literally with his suitcase o’ beasts). It’s the people he meets, like no-maj Jacob Kowalski (Dan Fogler), who are the most sympathetic.

The 1920s setting is beautiful. Although it’s painfully clear that this is England standing in for New York (and the less said about the faux American accents, the better), I appreciated the fact that more of it happened in the “real” world. We didn’t spend so much of our time in fantastical locations surrounded by smoke and fog. They’re all digital set extensions, sure, but at least the image has depth, rather than looking like a theatre stage.

It’s clear Warner Brothers threw a bunch of money at this film (and then some). It’s incredibly CGI-heavy, and as such, the effects frequently disappoint. When a human character reaches out the ruffle the fur of some kind of digital beastie, it never looks right. If they’d saved their money for only narratively significant moments, it would have been fine, but instead they splash their VFX budget around, so much so that the film’s bound to look embarrassing in ten years’ time.

The story here is of little consequence, and the sequel bait didn’t pique my curiosity in the slightest. Fantastic Beasts and Where to Find Them may interest diehard Potter fans, but for the rest of us, there’s nothing interesting to sink your teeth into.

Fantastic Beasts and Where to Find Them