Although Tina Fey has been big news for several years now, it has never been clear she would make the transition onto the big screen successfully, particularly after the abominable Baby Mama. Her stocks have risen substantially with Date Night, however, and it is her pairing with Steve Carell that means the film becomes anything more than the throwaway comedy it continues to threaten.

Carell and Fey are Phil and Claire Foster, seemingly happily married with a couple of kids and a full schedule of work and chauffeur duties that means the romance just might have disappeared from their lives. When a couple close to them announces they are going to separate, Phil decides he must enliven their weekly ‘date night’ by taking Claire to a fancy restaurant in New York rather than their local with its traditional salmon and potato skins. A misunderstanding will lead to an all-night chase throughout the city.

The most remarkable feature of this film is that the man responsible for such dreck as Cheaper by the Dozen has used common sense and brought in Date Night at a mere 88 minutes. Were the film much longer it might have overstayed its welcome, but there is enough interest generated by the chemistry of the two leads to carry it this far. High profile cameos abound and add further bursts of momentum that allow the close of the film to be reached with a degree of audience good will maintained.

Several moments that provoke outright laughter are matched by periods in which the writer appears to be searching for more serious emotional resonance, and for the most part these work to produce a marginally more mature portrayal of a couple experiencing a sneaking and unappreciated relationship crisis than might have been expected. Of course, Date Night is never going to be the film that teaches its audience about life, the universe and everything, but it is a refreshing change to have a comedy steer clear of the gross-out, cheaper material and aim for something higher, whether it truly succeeds or not.

Although Fey shades Carell in this outing, their combined force is greater than its parts, and they do a great job of being a couple in love but more focussed on the comfortable and routine than the exciting and new. Appearances by William Fichtner, Kristen Wiig, Mark Ruffalo, James Franco and Mila Kunis add spice to the mix, while it is great to see Ray Liotta as the mob boss the Fosters make the mistake of crossing paths with.

This isn’t the greatest film to come out of Hollywood in recent years, but neither is it as disappointingly trite and dull as most of the recent ‘comedies’ unfortunate audiences have been forced to endure. Excellent lead turns make this an enjoyable experience from start to finish.

I’d have to agree with just about everything Mark has said about this film.

First of all, it is indeed Carell and Fey who make Date Night something more than a throwaway comedy. These are two comedic actors at the top of their game and if the outtakes at the end of the film are anything to go by, they can take a lot of credit for the film’s funniest moments – it’s clear that many of the highlights are adlibs. The fact that the Fosters are so gosh darn nice really gives the comedy an edge you wouldn’t suspect, either. 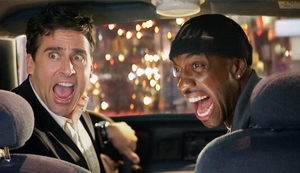 Too many romantic comedies recently seem to think that if the two lead characters are at each other’s throat all the time, the film will be funnier, without considering just how difficult it is for audiences to want the romance to succeed at the film’s end (as in The Proposal). With Date Night, I genuinely wanted our leads to resolve their problems and live happily ever after.

I actually felt the dramatic side of the film (though brief) was equally as strong. It rare these days to see a comedy focussing on a middle aged couple. Sure, there are plenty of middle-aged actors playing immature roles for cheap laughs, but seeing a film that is concerned with the unceasing demands of raising a family is rare these days. Part of the charm of Date Night is watching Phil and Claire trying to work out exactly what it is they’re missing in their relationship. Seeing them out to dinner in a restaurant, heaping scorn on the other couples whilst secretly feeling that something is missing from their own relationship is as tragic as it is funny.

As for the many supporting characters that share the screen for mere moments, it’s Kunis and Franco that steal the show. For me, however, it felt like Liotta dialled in his performance in role that – let’s face it – he’s played 100 times before.

There is more than one moment when the narrative could have easily fallen into common sexist traps, but time and time again we’re shown how Phil and Claire are equals. It really was refreshing to not be beaten over the head by double standards for once and also see a film where the some out of date notion of the gender divide dominates (think of the hysterical pregnant woman/immature slacker played by Katherine Heigl and Seth Rogen respectively in Knocked Up).

As Mark already mentioned, the brief running time certainly works in the film’s benefit, also. There are too many comedies that run out of laughs 20 minutes or so before the end, but thankfully this film doesn’t get the chance.

←Clash of the Titans Kick-Ass→