What’s the point? I guess if you wanted us to see this film, Mr Greengrass, you would have shown us some of the footage rather than just blurred closeups and jumpy action sequences. Maybe we could go to the cinema and just listen to the soundtrack? Would that suit you? Perhaps you made your film for blind people? Did I miss the stall at the entrance handing out blindfolds? Learn to frame a shot, and get someone who can hold a camera still, then reshoot this travesty and let us see what you had in mind for these characters!

I get a bit annoyed when my time is wasted, as you can see. But seriously, what was your goal here? To let me see any of your work? Follow the action? See the whole of even one person’s face? Apparently these are silly suggestions… why not film an action sequence with handheld, inside a speeding car, crashing into walls and such, the whole time holding a tight shot on Matt Damon’s earlobe? That’s what you’ve given us? Was that your aim?

I wonder why you would waste US$110 million on production and marketing, when you didn’t want us to be able to watch the end product? Were you so confident this was a ‘sure thing’ that you couldn’t be bothered? Just turned up one day, the film having been edited by the fabled Three Blind Mice, and said – ‘Good enough, let’s go to lunch!’??

There isn’t much here that is worthy of such a cast, or even my time. Matt Damon can play an automaton reasonably well, but he did struggle with the dialogue at times. Did you hire Karl Urban only to cash in on LOTR junkies? You didn’t seem to ask him to act. And why get Martin Csokas in as well? Are you a New Zealander? Are these guys your buddies? I can’t see why else they’d do it after glancing through the script (which, being so underdeveloped, must have stretched to, what, about ten pages? Double spaced).

And then to top it all off, you make Bourne do the same trick twice… get a new idea, would you? Like this ability of Bourne’s is going to surprise us, when you’ve already shown us how he does it? What were you thinking???

You wasted my time, Mr Greengrass. I looked forward to this. But all I got was a sore bum, and two hours (!) of boredom and vertigo. Thanks very much.

Okay, I actually liked this film, as opposed to Dr Mark ‘the cinematography makes me dizzy’ Lavercombe. 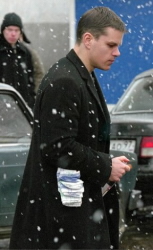 The Bourne Identity was, in my books, one of the two best action films of the last five or so years (along with Brotherhood Of The Wolf (Le Pacte Des Loups). It was a refreshing, fast-paced and intelligent film with some kick arse action sequences.

The Bourne Supremacy, is basically the same except significantly less so. This is still a high quality film.

Matt Damon seems to have less to say in this film. In fact he goes through a large part of this film saying nothing at all. Almost all of the supporting cast is back, and all do admirably. Julia Stiles in particular gives an awesome performance in a slightly larger role than her almost cameo-like stint in the first one. Joan Allen is also a powerful presence in Supremacy.

The action is good, even if there is less of it. Yes, the camera hardly ever stands still, but I didn’t have that much trouble following what was going on. I had a lot more difficulty in some of the sequences in AVP: Alien Vs. Predator – at least Supremacy is well-lit. The central car chase in this film is awesome – absolutely fantastic.

I think the main problem with The Bourne Supremacy is that the story simply isn’t as good. Whilst the characters we got to know from the first film make more progress than those in Spider-Man 2, there still isn’t much that we haven’t seen before. Having not read the book, I can’t say whether this fault lies with Ludlum or the scriptwriters, but Supremacy could have taken us further. (In fact more than once I thought it was saving up plot developments for further sequels).

By no means a bad film, Supremacy goes out of its way to be in a similar style to the first film. The colour correction is similar, even the end credit graphics and song are the same. Maybe if Paul Greengrass had taken us a little further, rather than playing it safe (or paying respect to Doug Liman’s effort), this would have been a better sequel.