I had a myriad of responses to Tokyo Ghoul as I sat through season 1. At first glance, there’s nothing particularly original here. Kaneki (Natsuki Hanae) is an ordinary high schooler living in Tokyo who is nearly killed and eaten in a ghoul attack. He survives, and quickly discovers that he now (a) has superpowers and (b) craves human flesh. He’s introduced to the ghouls of Anteiku – a group that do their best to keep a low profile, and never resort to killing innocent humans. But there are other ghouls out there who have no such compunctions. And then there are the humans that hunt them. 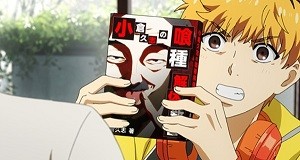 So far, so ‘Vampire: The Masquerade’. I mean, this show is a little different insofar as the residents of Tokyo are aware of the ghoul menace, but on the whole you could switch the word ‘ghoul’ for ‘vampire’.

But then, episode after episode, the show took me to some really interesting places. First off, it’s hard to establish who the good guys are. You sympathise with Kaneki and his fellow ghouls from Anteiku, yet they are monsters, even if they hang out at a local suicide spot in order to get fresh flesh without resorting to killing. Then there’s the Doves – the secret police who are out there tracking down and killing ghouls – some of which are true psychopaths, who want nothing more than to watch ghouls lose the ones they love in slow and painful ways. That being said, we also get to spend time with their more sane members, even sympathise with them. So they’re more than simple antagonists.

Visually, the series is a mishmash. Some of the character designs are old-school odd – I felt like I was watching ‘Street Fighter’ at times – but the huge variety of characters are certainly easy to keep track of when they all look so different. The portrayal of the ghouls’ kagune – their predatory powers that manifest in extra limbs/tentacles/wings – are striking in their variance, simplicity and asymmetry. Watching these creatures fight is never less than fascinating.

This is a show that takes itself very seriously. There’s barely any humour, and the further you get into season 1, the darker the show becomes. 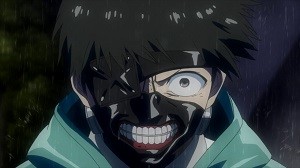 I found it difficult to sit through two whole episodes of torture – even if said torture is never actually depicted on screen – and I should warn you that the show isn’t for the faint-hearted. I can see why there presumably is a censored version out there somewhere.

The DVD set comes with a couple of commentaries, but the best part is the 20-something minute doco, ‘Kaneki in Black and White’ which features the English voice cast providing their own take on the characters and the show in general. It’s a surprisingly deep analysis, and goes to show how much effort goes into voice dubbing (even if, snob that I am, I always watch to the Japanese language version when it comes to anime.)

The collection ends on a cliff-hanger, so I can only hope that season 2 is released here shortly. I think it will be much easier to judge Tokyo Ghoul as a whole when that happens. As it stands now, this is a bold show that employs a lot of what we’ve seen before, but puts its own spin on things. A series to keep an eye on…