The last TV series developed by Genndy Tartakovsky before he moved on to the Hotel Transylvania movies, Sym-Bionic Titan is somewhat of a flawed masterpiece. Cruelly cancelled after one season supposedly because the network couldn’t acquire a toy licence, this is one of the most impressive kids’ action/adventure animations ever made. 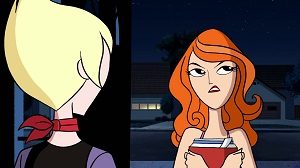 The series concerns three alien beings from the planet of Galaluna who crash-land on Earth after escaping a military coup on their home world. Our main characters are Ilana, princess of Galaluna, Lance, a soldier assigned to protect her, and their “bio-cybernetic robot”, Octus. The three of them are forced to hide out at Sherman High School, keeping their identities secret. When trouble comes calling in the form of monsters from their home planet, however, the three of them have their own mech suits they can call upon to do battle. And when all seems lost – in true Voltron style – the three of them can form Titan, a giant robot over which they share control.

It doesn’t sound like anything special, sure, but it’s the genius balancing of serialised storytelling that really impresses. Early on, we get monster-of-the-week type episodes. But we also get episodes focussing on the high school teen drama aspect, flashback episodes detailing the main characters’ earlier lives on Galaluna and regular clashes with all three of their antagonists.

When it comes to the bad guys, General Modula has taken over their home planet, and regularly sends his monsters out to search for the princess. But we also have Earth’s General Steel who has it in for Titan, this huge robot that seems to do a heck of a lot of damage to the cities it claims to protect. And finally we have Solomon, the mysterious figure working for the shady Government organisation known as G3. It’s this regular variation in threats that makes the show feel fresh. Throw in a couple of episodes concerning Octus and his quest to understand what it means to be human (very Data-like) and you have a show packed to the brim with great episodes.

The animation is truly wondrous. As far as sequential art goes, this is some of the best work I’ve ever seen in a TV show. Tartakovsky has an incredibly cinematic eye, and my jaw regularly hit the floor when I was presented with yet another stunning sequence.

So where does Sym-Bionic Titan fail? Well, the most glaring aspect would be the character of Ilana. When the show begins and the three Galalunans enter Sherman High School, it feels like the show’s going to be spoofing high school movie genre conventions. But you quickly learn that it’s not spoofing at all, it’s merely replicating them. 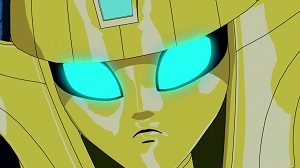 Thus Ilana quickly acclimatises to school life, and spends several episodes stressing about being a cheerleader, about going to the prom etcetera. Not only that, but she gets stuck with a mech suit that has a love heart on it *gags* and is regularly knocked down in battle, only to be saved by Lance. Couple this with her being told off for spending too much time stressing about “girly” stuff, and you have a show that is shockingly retrograde.

It’s so frustrating too, because towards the end of this collection, the show (a) shifts focus away from Ilana’s obsession with such things, and (b) introduces a love interest for Lance, a girl just as taciturn as he is, who spends her spare time perfecting her karate skills. They mightn’t have been changing Ilana’s character, but at least the show had begun to present a variation in female archetypes.

With inspiration clearly coming from a lot of anime shows of the 80s, Sym-Bionic Titan was a great burst of creativity from Tartakovsky, despite its shortcomings. It ends on a high note, and whilst not a cliff-hanger, there are enough dangling plot threads that I’m frustrated the show wasn’t continued. At least now you can enjoy its brief run – all 20 episodes – on home media. (And as far as I can tell, this version is the only available Sym-Bionic Titan box set in the world!)

Sym-Bionic Titan Season 1 is available now on DVD from Madman.