I rather enjoyed the first Guilty Crown collection. Derivative and sometimes predictable, it nevertheless delivered a mindless and occasionally emotionally-involving series of episodes. When push comes to shove, however, and the narrative capstone needs to be laid, the cracks in the foundation become more glaring. 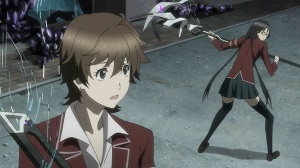 After the conclusion to the epic cliff-hanger at the end of Collection One, Guilty Crown changes the format rather impressively. With the fresh outbreak of the Apocalypse virus, GHQ have taken the drastic step of walling off one segment of the city. Trapped within are Shu and his classmates. With the walls literally closing in, and the Government mechs picking them off one by one, Shu is called upon to make some tough choices if they’re all going to survive.

The problem with Guilty Crown has always been that it comes up with interesting narrative peaks, but fails to make the connections between them. Thus, what could have been a thought-provoking exploration of Shu using the King’s Right Hand to make the tough decisions becomes a case of having his safety switch set to ‘evil’, just like a Krusty the Clown talking doll. This kind of character development doesn’t feel the least bit organic.

Then, before you know it, we have the age old anime trick of the show trying to be deep. Science, magic, religion, whatever – Guilty Crown isn’t particularly concerned with the hows or whyfors; it just knows it wants to get all philosophical and arty. Characters return from the dead and both Shu and Inori’s backstory are explored, but none of it really rings true.

The production values are as impressive as ever – this remains among the most visually impressive of anime TV shows – and perhaps that’s why there’s such a frenzied attempt to tick off all the anime clichés along the way. Like a big budget Hollywood movie, it has to appeal to as broad an audience as possible, so they cram in as many mechs/massive swords/cyberpunk hacking/fan service moments as they can, even if it doesn’t add up to much.

The ending is less than satisfying and more than a little confusing, and manages to be both open to interpretation and a cop-out, which is no mean feat. At the end of the day, Guilty Crown is a case of fast food anime – you know it’s bad for you, but for a while it remains enjoyable. This second half, however, is like the regret you feel afterwards, bloated and greasy.

Guilty Crown Collection Two is available now on Blu-ray and DVD from Madman.

←Noah The Garden of Words→