Even in the era of Peak Television, it’s weird to think I can review a TV series of this magnitude. Shot on 5.4K (I didn’t even know this was a thing) and apparently costing roughly $7 million an episode, Altered Carbon has to be one of the most impressive-looking shows ever made. The cinematography, costuming, set design and VFX are extraordinary. 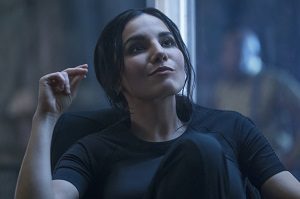 Richard K. Morgan’s book was first published in 2002, and the film rights were quickly sold for $1 million. It’s taken over 15 years for it to reach the screen, but for fans it’s surely been worth the wait. For those who don’t know, it’s a kind of cyberpunk detective novel. In the far-flung future, the richest of the rich can transfer their consciousness from one body to another. This is called re-sleeving. This means they are effectively immortal, and appropriately earns them the moniker of Methuselahs. When one of these Methuselah’s sleeves is ‘murdered’, he engages the help of an ex-convict, Takeshi Kovacs, to solve the mystery of his death.

It’s impossible to ignore the fact that Altered Carbon borrows heavily from the likes of Blade Runner and Ghost in the Shell. It’s not a particularly unique story, but the production values do make it stand out from other science fiction TV series, even in this current Golden Age.

Joel Kinnaman plays Kovacs, and I’d be lying if I didn’t say he’s rather wooden. There are very few actors that can brilliantly execute the downbeat, taciturn gumshoe, and he ain’t one of them. Serviceable is probably the best word for the performance.

Thankfully, his co-star, Martha Higareda, more than makes up for Kovacs’ blandness. Her police detective, Kristin Ortega, is the best part about this shoe, and her no-nonsense yet heartfelt delivery should mean she gets her own movie or series, stat. (In fact, she gets my vote if they ever adapt the “Anita Blake: Vampire Hunter” novels.) There are a tonne of supporting actors that excel in smaller roles too, including Ato Essando as a grieving ex-marine and Chris Conner as an AI self-styled after Edgar Allan Poe.

But the main problem I have with Altered Carbon is more thematic. First off, we have this great premise, with people being able to change their appearance by re-sleeving. The potential stories are legion, surely! So what do we get? Sex workers. All this storytelling potential, and our lead characters spends most of his time in strip clubs and/or brothels.

But it doesn’t stop there. What this story really needs is dead sex workers. 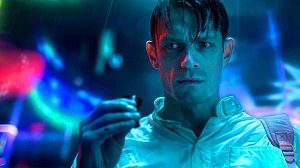 Female dead sex workers, naturally, because if Blade Runner 2049 taught us anything, it’s that future noir is just as obsessed with dead naked women as old-fashioned noir. The number of naked women who get either ogled, beaten, raped or killed – or any combination of the above – is quite excessive for a story that could have taken its premise literally anywhere, but instead stuck with the tropes that have dogged the genre for decades.

There a lot of almost-literal white-washing going on too. Frequently. It’s like they saw a certain remake released last year and said, “Hold my drink.” What makes it worse is that Will Yun Lee, who plays the original Kovacs, gives a much more nuanced performance. He should have been the star of this show.

Apologies for the rant. I can only assume that the problems I have with Altered Carbon were also present in the source material. In my old age, I’m clearly getting fed up with science fiction – a genre that offers so many possibilities – refusing to get really creative, and instead falling back on bad habits. If you’re fresh to the science fiction noir subgenre, perhaps these things won’t bother you. I just wish Altered Carbon had some ideas to match the stunning production values and fantastic performances.