Many might suggest that The Visit is basically M. Night Shyamalan does Paranormal Activity. And they wouldn’t be that far wrong. In fact, it feels like producer extraordinaire, Jason Blum (of Blumhouse Productions) sat down with Shyamalan and said, “How do you feel about writing a Paranormal Activity sequel?” Shyamalan then came back with a finished script and said, “You know what, this film feels more self-contained than part of that franchise,” and Blum gave him the go ahead anyway. 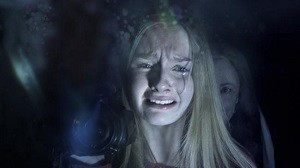 For you see, here we have a found footage movie featuring a couple of teenagers filming creepy goings-on in their grandparents’ house in the country. There are many instances of ‘why they hell would anyone be filming right about now?’ and the soundtrack even features the same ominous PA bass rumble before the creepy stuff happens. Let me make this clear: if you hate the PA films, you won’t like this.

The Visit is, however, clearly a Shyamalan film. All the character arcs, Chekov guns and narrative themes are present, including his favourite ever story-within-a-story gimmick. As you’d expect, he expertly directs his young actors, Olivia DeJonge and Ed Oxenbould, and elicits some amazingly adult performances from them.

DeJonge and Oxenbould play Becca and Tyler, siblings who have been invited to stay with their grandparents, whom they’ve never met. Years ago, her mother walked out on her parents and never looked back. Becca and Tyler are keen to meet them, and perhaps find out what went wrong all that time ago. And, wouldn’t you know it, Becca’s an inspiring filmmaker, so plans to make a documentary about their week away.

DeJonge and Oxenbould are fantastic, and it’s their characters’ relationship that’s the real triumph here. These aren’t bickering siblings – they truly look out for each other, and there are several scenes that are incredibly touching. It also helps that they really look like brother and sister.

From the first ten minutes, it’s apparent that Shyamalan and the found footage conceit don’t make for perfect cinema. Whilst he excels at it in short bursts (remember the birthday party in Signs?), here he never comes close to cinéma vérité. Sure, he has an excuse: Becca’s always performing, playing the documentary filmmaker, so the sense of artificiality doesn’t exactly ruin the film. But the awkwardness remains.

The pacing doesn’t feel quite right to me either. There’s no slow build-up of dread. More than once, something shocking happened but was so brief and so unexpected that I didn’t even have time to get scared. In fact, I wasn’t scared once in The Visit, which is weird considering how the first three Paranormal Activity films really got under my skin.

This is a horror comedy, with emphasis on the comedy. The problem is that it overwhelms the horror, so that you’re never actually on the edge of your seat or trembling with anticipation of the fright to come. The Visit certainly has its moments – and is nowhere near as dire as Lady in the Water, The Last Airbender or After Earth – but this isn’t a true return to form for Shyamalan.