Bryan Singer returns to the world of non-comic book-based movies with Valkyrie… which turns out to be… a little comic booky. But not in a bad way. 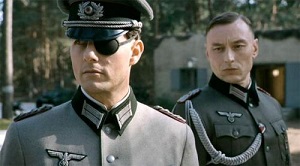 To be fair, Singer’s X-Men heralded the New Era of the comic book genre, and its simple and elegant shooting style has been continued in the decade since. These films are flashy but rarely let the editing get too choppy, lest we miss some of the effects-laden visuals. Singer hasn’t changed his cinematic style at all with Valkyrie, which is probably why it’s so reminiscent of that genre. Also, as has been noted elsewhere, the Nazi visual design does lend itself well to comic book villains. Overall, the film looks great – utilising all the cinematic shorthand we’ve seen before in World War II themed films, and utilising very little CGI.

As a piece of entertainment, Valkyrie is top notch. It takes a certain amount of skill to entertain with a story of which everyone knows the ending, but as Apollo 13 and Titanic have shown us, it is possible. The film details an assassination attempt on Hitler by his own men, and the intrigue lies in the plan itself – I for one had no idea of the particulars of this little moment in history. Colonel Claus von Stauffenberg (Tom Cruise) leads a group of men in an inspired coup that makes clever use of the Third Reich’s chain of command in an attempt to shift the balance of power in Germany.

I have heard that this interpretation of history does smooth over the motives of von Stauffenberg, though I can understand why a film such as this needs its ‘good guys’. It is clear, however, that this is a man who wants to save Germany, rather than save those being murdered by the Nazi regime. He knows that once the Allies close in, there’ll be no hope of reaching a satisfactory truce from Germany’s perspective.

Cruise is great in the lead role, despite his American accent sticking out amongst all the English ones. (It’s cute that the audience becomes fluent in German within two minutes, rivalling The Hunt for the Red October‘s rather lengthy Russian lesson.) Despite usually assuming rather bland action movie roles, he can unleash some great thespiating when the occasion demands (think Born on the Fourth of July, Interview with the Vampire, or even Tropic Thunder). He is surrounded by a stunning cast, including Bill Nighy, Tom Wilkinson, Terrence Stamp, Eddie Izzard and a woefully under-utilised Kenneth Branagh who nevertheless makes an incredible mark on the film in his short time onscreen.

This is a great thriller – beautifully shot and with a great score by John Ottman (rather reminiscent of the Batman Begins soundtrack and, embarrassingly, ‘Return to Castle Wolfenstein’). The film moves at a cracking pace, and is always entertaining despite being filled with a bunch of men in uniform talking at each other through furrowed brows.

The past few years have been troublesome for one of the modern era’s most bankable Hollywood stars. Tom Cruise has gone from marquee act to object of satire and derision, in a fall in popularity almost unimaginable a decade ago. In this context, it is reassuring for his remaining fans that he can still capture an audience along with the best of them.

Cruise is Colonel Claus von Stauffenberg, a German patriot first and Nazi officer second. After being injured in North Africa, von Stauffenberg is recruited to the German Resistance, eventually becoming the leader of a group responsible for an elaborate attempt to assassinate Hitler and wrest control of Germany away from the SS. 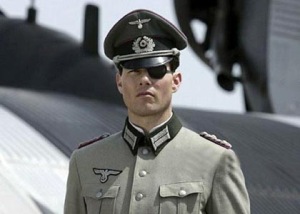 That history tells us he failed is beside the point – in Valkyrie, von Stauffenberg and his men are revealed as heroic in spite of their failure.

Director Bryan Singer moves the film along at pace, ensuring the audience is enthralled with the question ‘what if?’ without really having time to consider its ramifications. The film works as a thriller, mostly when one is able to forget the actuality of this real-life story and be drawn into the hopes of the men involved.

Cruise is excellent in the lead, although one wonders whether he may have been allowed a little more ambiguity in his character – the usual tension between accuracy and entertainment in films based on historical events means this is always a difficult decision, but as a leading man von Stauffenberg is just a little too one-dimensional. Around him, however, a cast of characters whose ambitions will become naked for all to examine is brought to life by one of the better ensembles of recent years. Bill Nighy, Kenneth Branagh, Tom Wilkinson, Thomas Kretschmann, Terence Stamp and Eddie Izzard all feature in varying roles ranging from hero to scoundrel. It is Wilkinson (and Nighy, to a degree) who is allowed most time to develop his turn and he reminds again of his skill.

The look of the film is just about right, with the effect of the war on Berlin vividly brought to life in a single shot of the interior of the Kaiser Wilhem Cathedral. The city that is the focus of the plotter’s efforts is rarely seen on screen however, with interiors far more prominent and prolonged sequences in the Berghof and Wolf’s Lair compounds.

Unfortunately, the variety of American and British accents among the cast jars, particularly given Hitler is played in a Germanic-accented English. Additonally, the large number of minor characters of uncertain significance may mean some audience members will be left asking their friends to clarify their roles and intentions. Finally, although Singer tries manfully and almost succeeds, the well-known facts of Hitler’s life and eventual death rob the film of any true tension.

A welcome return to form for Cruise, Valkyrie will entertain most.