It may come as no surprise to some that, as increasingly became the trend in the Twilight movies, the best parts of Breaking Dawn Part 2 are the bits that aren’t in the book.

In my humble opinion, the novel ‘Breaking Dawn’ itself was an exercise in futility, since author Stephanie Meyer failed to deliver on every single instance of conflict she created. Time and again, each major insurmountable obstacle that Bella and co. faced was instantly resolved with very little tension. I was curious to see how on Earth this would make for a thrilling movie experience.

The good news is that most of the offensive stuff (women putting up with violent men, women getting punished for having sex, yada yada yada) was taken care of in Part 1. Now that Bella Swan is a vampire, you’d think she’d finally get to have some fun. And she does, to a certain extent. The opening sequence of Part 2 features her coming to terms with her newfound powers, and it’s easy to see what’s so thrilling about being a member of the sparkly undead. From that point, however, the film slows down considerably. Whilst Bella’s coming to terms with her vampiric nature, she also has to deal with the fact that her daughter, Renesmee, not only has the worst name in the history of bad names, but the Volturi aren’t happy about her existence.

This means we get more of Michael Sheen, which is always a good thing. However, for some reason that’s never really explained, it takes the Volturi a really long time to travel from Italy to Forks, even if the Cullens have been zipping all over the globe in the meantime, trying to rally support. When we finally get to the climax (something completely missing from the book), it turns out that the filmmakers have something special for us indeed. If I could buy a Blu-ray of just the 25 minutes or so of action at the end of the film, I would, because it’s thrilling and exciting and emotional and a whole lot of other words that can’t really be applied to the rest of the franchise.

I’ve already praised Michael Sheen, but I should also mention Billy Burke, who has managed, against the odds, to be brilliant throughout all of the Twilight films. Our central three stars – Stewart, Pattinson and Lautner – still fail to impress, whilst the extraordinarily large supporting cast of multicultural vampires only get a handful of lines each, having to rely mostly on their costuming to get across any depth of character.

It’s always surprised me just how crappy the visual effects have been in the Twilight Saga considering the fact that the films make millions of dollars. Whilst Breaking Dawn Part 2 is probably the best looking of the series, there are still some awful effects on display. The high speed runs through the forest look just as silly as they did in the first film, whilst the CGI baby Renesmee is woefully unrealistic and thoroughly creepy.

I can appreciate that fans of Harry Potter and Twilight may like the recent trend of splitting up the final novel of a series into two films, because it means that the story really has time to breathe. Then again, a brilliant script is a brilliant script, so there’s no reason why you can’t squeeze an entire novel into two hours and produce a film that’s just as emotionally charged as the books supposedly are.

At the end of the day, it’s only really fans that will be watching Breaking Dawn Part 2, and I can’t see how they could have any problems with the adaptation. It’s like the book, only slightly better. For everyone else, it’s yet another case of reasonably pretty people standing around, awkwardly delivering lines that are nowhere near as profound as they’d like to think they are.

That the best thing that can be said for this latest instalment of the interminable Twilight series is that it is the final instalment is damning. The sense of relief that this story had finally been told almost brought this film-lover to tears, and one can only hope that this is the last we’ll hear of the anaemic creations of author Stephenie Meyer.

Bella is now undead, her half-human half-vampire offspring Renesmee is growing up in the loving bosom of her family of bloodsuckers, but not all is well in the world. Conflict with Jacob about his growing affection for Bella’s child will threaten their newfound happiness, while the Volturi might want to come to kill everyone, at some stage, soon, you know, maybe, one day.

The most troubling thing about this series of films is how staunchly they have refused to acknowledge or even remotely address the implications of the decisions and behaviours of their characters. 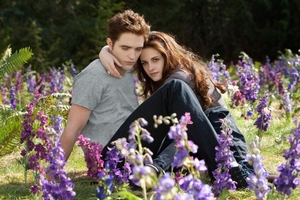 Audiences have been exposed to domestic abuse, portrayals of the teenage girl as dependent entirely on her man for self esteem, bizarre notions about sex and punishment that would make the Catholic Church think twice, and now we have barely disguised paedophilia that is dealt with in a couple of lines of dialogue before everyone goes back to playing happy families. At least it is acknowledged at all, one could argue, however the utter disregard for responsible discussion of the many issues that appear to affect young women growing up in Forks is reprehensible. I’m no prude, I just don’t like bad writing.

Another recurring theme throughout the series is the disappointing visual effects that mean the moments intended to provoke wonder or even awe instead trigger an out-of-film moment where the audience considers how so much money could be spent on so little. There are films from the 1980s that manage characters performing superhuman feats more believably than Breaking Dawn 2.

The widely criticised decision to split the final of Meyer’s Twilight Saga novels into two films comes back to haunt director Bill Condon, who struggles to make much out of the standing around and talking that afflicts the middle of this script. That the film could readily be condensed into around 30 minutes of screen time suggests there is enough padding here to insulate homes the world over. Oh look, Bella can run fast and do stuff. Lots of meaningless nonsense about the Cullens finding ‘witnesses’ that will enable them to prevent their mass slaughter. Big fight scene. Soppy outro. Why this couldn’t have been appended to the end of the previous Breaking Dawn is unclear, except when one considers the obvious financial outcomes.

The final payoff does register a flicker of excitement, if only while one wonders which of the characters we have grown to loathe will have their head ripped off next. The (ab)use of one of the most trite of cinematic tricks is utterly laughable, however, and certainly in my screening the howls of mirth from sections of the audience threatened to ruin the faux meaningful character countdown that suggests we have been witness to something epic and emotional when most will just be glad to be done.

Farewell, Twilight Saga, thanks for all you’ve given us.

←End of Watch The Sessions→