Looking back on my reviews of the previous films in this series, it’s hard to imagine that I actually enjoyed the original Twilight. There was, however, a kind of blissful innocence about that film (apart from the whole stalking thing), and Catherine Hardwicke’s direction really made the most of rather poor source material. Somewhere along the line, however, shit got serious. As the books evolve, they go about their romance in a strangely archaic fashion, kicking feminism in the shins as the story progresses. Breaking Dawn, then is the ultimate in conservative, pre-Suffragette views about women, sex and childbirth, and as such Meyer’s book is nothing short of offensive. For those who don’t know but still care (if they exist), Breaking Dawn begins with the long awaited wedding of Bella and Edward. “Long” is a word that applies to the wedding also, which seemed to take up a good 30 minutes of the running time. I appreciate that the filmmakers wanted to get such an important moment “right”, but I haven’t seen such a slow, matrimonial start to a film since The Deer Hunter. There are some clever filmmaking skillz present here. For Bella’s walk down the aisle, the camera’s kept alternately on her and from her perspective, which really did hammer home the notion that it’s clearly the most nerve-wracking walk one can partake in this side of The Green Mile. Funnily enough, some of the best material during these scenes comes from dialogue that wasn’t written in the books. Telling, that.

Once we get to the honeymoon, everything starts to go wrong because, wouldn’t you know it, women can’t have sex without being punished. Once Bella’s bitten into that apple, everything goes pear-shaped (if you excuse my fruit salad metaphoring), and before you can say “sanguis bibimus, corpus edimus, toll corpus satani, ave”, she’s got a bellyful of demon baby.

Splitting the book up into two films makes a certain amount of sense, though we all know that the studios were thinking about cents instead. As it stands, Breaking Dawn manages to feel like its own film, even if it has to beef up the climax because Meyer couldn’t seem to manage such moments in any of the books. Unfortunately, said climax features a lot of CGI and a lot of darkness, so you can’t really tell what’s going on.

The visual effects aren’t bad, and are certainly much better than in the first film. The wolves look great in isolation, though they never appear to be sharing the same physical space as the actual actors. The score, however, is all over the place. During one of the supposedly heartfelt, quiet scenes near the start of the film, the orchestra seemed to think we were at the circus, and Carter Burwell’s work consistently disappoints.

When it comes to the performances, it’s a case of same old, same old. Kristen Stewart does a decent job as Bella, but Robert Pattinson looks as constipated as ever. Even Taylor Lautner out-performs this guy, which is pretty incredible when you think about it. The rest of the vamps/wolves get the job done to varying degrees, but everyone seems too distracted by their contact lenses/toplessness to really emote effectively.

Breaking Dawn is a film that’s alternately limp and offensive. The narrative saw all the main characters acting in ways that simply pissed me off, and the “big” moments, whether they were drama or action-related, fell flat. It’ll be interesting to see if the lacklustre audience response I’ve been reading about, coupled with the 12 month wait, will still result in Part 2 being a box office success.

For those of us who felt the first Twilight film had very little to offer, it will be somewhat disheartening to know that this fourth of five instalments is the worst so far. Yes, the story might be unfairly hampered by having been artificially cleaved in two in an obvious attempt to rob thousands of teenage girls blind, but the events of this film are the most ridiculous yet. A statement made all the more powerful when one considers how appallingly silly the previous films are.

The day that every young virgin longs for has finally arrived, and Bella is due to march down the aisle to marry her centenarian fiancé Edward, before being whisked off to a romantic island somewhere to be torn apart by his animalistic sexual passion. 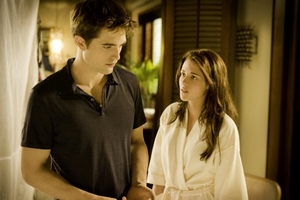 Jacob is still sulking, or growling perhaps, depending if he’s walking around without clothes on or has turned into his wolf form (Bud-ump bump!). Billy Burke as Chief Swan can barely hide his disgust that he’s had to appear as the father in two soppy little supernatural thrillers opposite doe-eyed heroine daughters in the same calendar year. Their supporting cast seem to be trying only to maintain a straight face while inwardly cursing their managers for getting them into such a mess.

The problem is not only that the story is just plain silly, but the film takes itself so seriously and can’t seem to see how absurd much of its content really is. For those unfamiliar with the product of the progressively more bizarro imaginings of Miss Stephenie Meyer, it’s not for me to spoil the fun, but let’s just say that this film flirts with all kinds of moral taboos before its vivisectional conclusion. One really must begin to wonder how this material can be seen to be romantic… Then, as if to acknowledge that it has become bogged down in the self-absorption of an annoying teenager, truly misplaced comic relief is inserted. All with a soundtrack that is utterly intrusive, overbearing and freakishly unsuited to the vision it accompanies.

Breaking Dawn – Part 1 also takes an inordinate amount of time to get to the good stuff and, when it finally decides that more lingering on the nuptials will be redundant, then seems to realise it has nothing more to say. Yes, there’s the wedding night, and the inevitable punishment for a young girl who, gulp!, wants to have sex with her new husband. (Sex -> bruising and pain -> anorexia -> death). After that, however, it’s just long stretches of Bella wasting away and blokes arguing about which of them has more influence over her decisions.

For much of the film I was left feeling sorry for Kristen Stewart and Robert Pattinson, and one hopes they can both move on after their commitment to this series is over. That they have participated in one of the worst wastes of large volumes of money and people’s time is surely a black mark against their careers, but both have shown just enough to suggest they are better than this dross and might reward our forgiveness.

The Twilight Saga: Breaking Dawn – Part 1 contains almost nothing of redeeming value, and its inevitable box office success serves only as an indictment of its audience, while its backers laugh all the way to the bank.