Big budget epics aren’t really my thing. That’s why I’ll always prefer a Rob Roy to a Braveheart, and a King Arthur to a Troy. I prefer films that have a narrower focus and of course brevity is the soul of wit, so I’m always gonna go with the shorter ones.

The stars are all in attendance, trying to look important and um, historic. And the special effects are here, even if they are a little hard to swallow at times (have you tried to parallel park 1000 ships?). 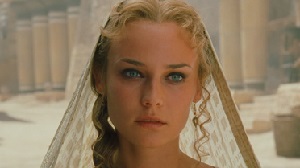 Okay so most people know bits and pieces about this story. Basically we’re all waiting for the Horse and the Heel, and we’re not disappointed. In fact I quite enjoyed watching this film at the time, but can’t imagine watching it again. It’s great to see a spear fight, since I can remember seeing that done before, but I got a bit sick of Achilles’ Cool Fight Move™ which was repeated way too often.

It’s strange to see Brad Pitt in such a muscle-bound heroic role. Whilst his actions are often reprehensible, it’s strange to imagine that this is the same guy that seemed to eschew traditional heroic roles in favour for Tyler Durden et. al. Helen is disappointing, but I suppose she does have to perform under a fair amount of pressure. She’s a very standard beauty, nothing particularly ethereal, as if the filmmakers wanted to play it safe. Bana was fine, but as with Black Hawk Down and The Hulk, he simply lacks the charisma to truly hold my attention the way he did in Chopper.

As far as epics go, at least we’ve come a long way from those of the 70s, which were much longer and had much more talking. There’s less room for self-indulgent performances in the more fast-paced Hollywood machine, which I would usually curse, but here it works well.