I first read John Marsden’s ‘Tomorrow, When the War Began’ when it first came out in 1993, and the books had a profound affect on me. When the extended series (‘The Ellie Chronicles’) finally came to an end in 2006, I felt like I’d grown up with these characters, having been reading about them for half my life. Thus, it was with nervous anticipation (and a smidge of trepidation) that I patiently awaited the arrival of the movie.

Stuart Beattie’s film is not without its faults, however is true to the source material and a great film overall. For those who don’t know, Tomorrow When the War Began concerns a group of eight teenagers who go on a camping trip into the bush for several days, only to return to find that Australia has been invaded.

First of all, the casting is fantastic. Every single character is brought to life in the exact same fashion I remembered from the books. Caitlin Stasey grounds the film as central character, Ellie. Whilst I was not in the slightest bit convinced that this girl regularly wields chainsaws on a farm with those slender arms, she does otherwise perfectly embody Ellie – a thoroughly practical young woman who is one of the first to be transformed by the war. Phoebe Tonkin is particularly hilarious as ‘townie’ Fi, who is initially the least capable of taking care of herself, much less going head to head against the invaders. Rachel Hurd-Wood, who perhaps has the most extensive film resume of the young actors, is wonderful as Ellie’s best friend, Corrie, as is Deniz Akdeniz as Homer. Chris Pang expertly manages perhaps the most difficult job as Lee, who is definitely the outsider of the group, whilst Ashleigh Cummings is brilliantly spot on as the über-religious Robyn.

The film looks great – it has a decent budget behind it and truly does justice to the more spectacular moments from the book. The action is well handled too, which manages to find the right balance between exhilarating and realistic. Beattie manages to ramp up the tension in several wonderfully executed scenes early on, and the whilst this is an action film and does work on that level, he hasn’t forgotten the more sobering moments of the book – the emotional repercussions of their violent acts certainly aren’t ignored. Also, the film’s comedic moments are truly hilarious.

Tomorrow When the War Began isn’t without a misstep or two, however, and these are rather glaring. There are three crucial scenes that simply feel a bit… awkward. Unfortunately, they are critical to the story, yet the direction feels confused. Beattie has indeed taken much of the dialogue straight from the books, so perhaps this is a simply a case where some more creative rewriting needed to occur in the transition from book to screen. It is such a pity that the film falters in these few moments – and they are indeed only moments – when the rest is so wonderful.

Thankfully, these missteps don’t overwhelm Tomorrow When the War Began, and certainly don’t stop it from being an action-packed flick with a disturbing undercurrent paralleling the characters’ collective loss of innocence. It mightn’t be perfect, but it’s a wonderfully refreshing film to see coming out of Australia, and it certainly does justice to John Marsden’s work.

Australia doesn’t have a great track record for producing films like Tomorrow, When the War Began, which makes the achievement of writer/director Stuart Beattie all the more meritorious. He has crafted a well-paced action/adventure film that competently examines the decisions of its protagonists, and, despite being very ‘Hollywood’ in its production, remains clearly identifiable as Australian.

When a group of teens goes hiking to an idyllic part of the bush named ‘Hell’ – a place name that can have been decided upon only by someone with a well developed sense of irony – they have no idea that everything they know will have changed before their return. 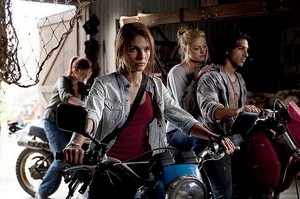 When they realise that a foreign army has taken over their town and its port as a base for invasion, they will be challenged as never before. Will they fight, and if they do, how will it affect them?

This really is a very competently made action film, and it will be hard for many local viewers to remember the last time that could be said about any of our product. It feels like an American production, and perhaps this is a reflection of the time Beattie has spent writing for Hollywood films like the Pirates of the Caribbean quadrilogy, 30 Days of Night, and probably the best of his output to date, Collateral. That he has managed to retain the quintessential Australian-ness of the story while aiming to produce a film with more than local appeal is quite impressive. The use of great music by local artists for the film’s soundtrack really helps.

Apparently, one of the larger differences between the novels (which I haven’t read) and the film is that the invading force is given ethnicity for the screen. While some reviews have made mention of this (including our colleague Stephen Rowley’s predictably excellent piece), others have skirted the issue, making light of the perception that making the invading ‘coalition’ one of clearly Asian armies could perhaps be seen as paranoid racism. It is hard to see how the visual medium of film could successfully manage to hide the background of the invading soldiers, however, and equally hard to imagine any other country or group other than our neighbours being believable as invaders. As Rowley points out, the premise of a film like this doesn’t have to be credible, if the focus is on the characters’ reactions rather than the initiating event itself. Perhaps those critics who have seemed more accepting have been more impressed by the cast and their characters.

Several of the characters are quite poorly drawn, and this might prove yet more ammunition in the argument about novel to screen transition: where film has only a limited time and must sometimes resort to shorthand in defining and developing its characters, novelists comparatively have all the time in the world. 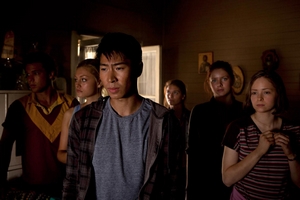 The film’s performances, however, are strong enough that the archetypes feel more real than perhaps they might have otherwise. Although it is frequently hard to forget that Caitlin Stasey and Lincoln Lewis began their careers on ‘Neighbours’ and ‘Home & Away’ respectively, both are at least competent in the two most interesting roles. The eye-catching performance of Deniz Akdeniz as Homer may signal the arrival of a new star, such is the charisma he displays. Rachel Hurd-Wood, Phoebe Tonkin and Chris Pang are all adequate in supporting turns. Colin Friels appears in a brief cameo, playing a character whose introduction seems intended only to progress the narrative rather than add anything in his own right. The film would have been more effective if the group dynamic was allowed to persist without outside influence.

There are other aspects in which the page-to-screen conversion doesn’t work, most clearly in the scripting, which features some rather unfortunate howlers. I have practically begged screenwriters to have the courage to abandon the source’s flaws and make a film that is good in its own right, rather than accept and retain those flaws for the sake of ‘staying true’. The list of films that have suffered due to the nonsensical idea that fans of the books won’t tolerate changes that make the film a stronger product is long and becoming ever longer.

At only 103 minutes Tomorrow, When the War Began really flies by, and, while this brevity should be applauded, another few minutes of screentime spent on character development might have made the film more successful. Despite its imperfections, however, Beattie’s film is a solid and eminently watchable introduction to the world of Marsden’s characters.

←Scott Pilgrim vs. the World The Other Guys→

Tomorrow, When the War Began