Hot on the heels of another 80s movie sequel featuring an aging superstar trying to recapture their youth with limited success comes Terminator: Dark Fate. In this sixth instalment in the Terminator franchise, Linda Hamilton and Arnold Schwarzenegger are back together for the first time since Terminator 2: Judgment Day in a film no-one really needed.

A naked young woman arrives in Mexico in a flash of localised electrical discharge, quickly obtains clothes and a car and sets off on a mission with little explanation. A man arrives in similar circumstances. When they meet… well, you know the drill.

Mackenzie Davis stars as the naked young woman and she is the best thing about this – hopefully final – Terminator film by a good measure. Anyone who has seen Halt and Catch Fire will know how powerful she can be, but this is probably her most prominent role since her small but important character in The Martian. Davis brings just the right amount of strength mixed with fear and fragility. She is fantastic in an otherwise mediocre film.

For anyone who watched Terminator 2: Judgment Day and marvelled at James Cameron’s VFX chops while enjoying an almost perfect conclusion to the story from The Terminator, the hack job that is done on the story and legacy of those films is hard to believe. 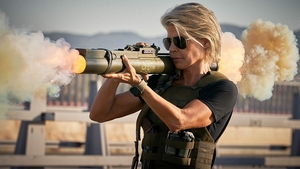 This film was released with a bunch of ‘James Cameron is back doing Terminator’ publicity and his involvement as story author and producer was trumpeted as a reason that this Terminator reboot will get it right.

One must wonder if Cameron has forgotten what happened at the end of T2 as the retcon performed here makes no sense whatsoever.

Talk about a slap to the face. Arnie’s T800 didn’t need to lower himself into a vat of molten metal? The iconic image of his thumbs-up sign as he sacrifices himself was meaningless? Oh, dear.

This is a competent film, with action sequences that are sometimes exciting and yet very often things just feel flat. Robert Patrick’s molten T-1000 was terrifying because he was incredibly hard to conquer and completely soulless. It is hard to specify exactly why Gabriel Luna’s REV-9 doesn’t invoke the same sense of hopelessness, but it means the turmoil inflicted on the lives of Dani and Diego Ramos is harder to engage with.

It is enjoyable to consider some of the broader ideas raised by having a different apocalypse to consider after Sarah & John Connor avert the Skynet disaster in T2. The concept of the alternative future being different but equally bad is alarming and makes a good point about Man’s tendency to self-destruct. It will be difficult for fans, however, to ignore the canon and accept this new Dark Fate on its merits.