If being unable to imagine it any other way is a measure of the strength of a film adaptation, Tim Burton’s version of the Sondheim stage show is very successful indeed. Judiciously edited to work better on the screen and featuring actors with heretofore unknown skill as singers, Sweeney Todd: The Demon Barber of Fleet Street is a bleak and bloody ride through the gothic London world of the famous barber brought to life by the wonderful Johnny Depp. Arriving in London by ship in the dark of night, Sweeney Todd appraises the world of his youth – There’s a hole in the world like a great black pit and the vermin of the world inhabit it and its morals aren’t worth what a pin can spit and it goes by the name of London – before setting out to find accommodation off Fleet Street above the pie shop of Mrs. ‘The Worst Pies in London’ Lovett (Helena Bonham Carter). Gradually learning what has become of his beloved wife and daughter in his absence, Sweeney sets a course to wreak bloody revenge. There is much more to it than that of course, but the revelations are best left unspoiled for the uninitiated.

That Sweeney Todd: The Demon Barber of Fleet Street is a musical may come as a surprise to some, leading to controversy about the marketing of the film which certainly seems to have knowingly downplayed this fact. The other surprise is perhaps not surprising at all – Johnny Depp, master of the acting trade and hero to thespians everywhere, can sing as well as act. Sure, he is not Pavarotti, but his earthy, at times almost gutteral, presentation of his lyrics suits his character to a tee. Bonham Carter also manages to maintain the illusion in spite of moments of singing awkwardness, and her Mrs Lovett is the perfect foil for the schemes of Todd. Additionally, their songs are well choreographed amidst the London of our nightmares, meaning the awkwardness of some screen musicals is never an issue – it seems natural that Todd and Lovett would sing and dance in this manner in these settings.

The advantage film has in comparison to a stage performance is the freedom to make this a most bloody experience. Every death is brutal and the final body count allows for a lot of gore – not something Burton ever shirks away from presenting in glorious reds against his background of greys and black. The use of colour amidst the gloom maximises the impact of these moments, before allowing the audience to settle again with the comparatively strangely reassuring drabness of his world. Perhaps the strongest feature of the film is its use of a colour palette so bleak it infuses every scene with flavour.

With a rather satisfying outcome for most characters, songs that can in the most part be hummed along to and a visual style that effectively enhances the experience of seeing Sondheim’s stageshow brought to the screen, Sweeney Todd: The Demon Barber of Fleet Street is an excellent conversion of its source to film. Winning performances by its leads allow its rather repulsive characters to engender audience good will in spite of their obvious flaws, yet the balance of their charm against their acts will leave many appropriately uncomfortable. Recommended, but not for those who don’t appreciate a little bit of claret.

Now here’s a screen musical that doesn’t disappoint quite as much as I’ve come to expect. I’m not a huge fan of the genre, preferring to see a musical on stage, and my favourites in recent years are those that are written specifically for the screen, such as Across the Universe. But Sweeney Todd gets it right.

Tim Burton, it seems, will never change. I don’t mean this in a disparaging manner – I love his kooky gothic styling, his irrepressible urge to fill the screen with black. But even the most ardent fan must admit that his films are all rather… similar. The fact that this is his sixth collaboration with Johnny Depp only further illustrates this theory. 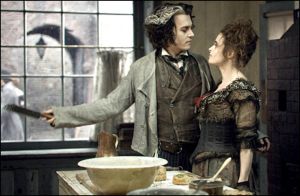 Depp throws himself into the title role with his usual brilliance. His singing is pretty darn good, too. Another Burton regular, Helena Bonham Carter is great as Mrs. Lovett, the woman who takes the vengeful Sweeney (AKA Benjamin Barker) in upon his return to London. Timothy Spall and Alan Rickman are great also, though it’s clear that no one is really stretching him- or herself. Excepting for the actual singing, everyone’s playing to type. The only surprise is arguably Sacha Baron Cohen as rival barber Signor Adolfo Pirelli – though his chameleon-like approach to his other well known characters has always hinted at a broader range.

The songs are great, and much better than the enjoyable though instantly forgettable tunes in Hairspray. I found it a little hard to understand at times, particularly during Mrs. Lovett’s introduction, which had Bonham Carter spewing out thickly accented lyrics at an insane speed. The fact that a good 80 percent of the narrative is sung works in the film’s favour – we have very few of the ‘oh-oh, they’re gonna sing’ moments that I find so awkward.

The main problem with the film would have to be its narrow focus. There are only two rather simple plots, and the supporting characters don’t really have backstories to speak of. There are also a couple of songs that only serve to further illustrate that which we already know, feeling like a waste of time. Even more frustrating, Anthony Stewart Head (from ‘Buffy’) has ONE LINE. I’ve read that apparently several characters were cut from the film during production, and it would appear that he is one of them, since he isn’t even credited.

Sweeney Todd looks and sounds great. The deliberately two-dimensional special effects create a wonderfully set-like London, and it’s grimy and dirty and oh so bloody. Did I mention that? Blood. Lots of it. It’s really quite insane. Some members of the audience obviously hadn’t expected quite so many buckets of the crimson fluid. Definitely not for the squeamish.