The first fifteen minutes or so of this comedy are hysterically funny. In fact this film features some of the best opening moments in a comedy ever (seriously, up there with Monty Python And The Holy Grail). In fact the people I was watching Super Troopers with went back to watch the opening sequence for a second time only minutes after the film finished.

As with all comedies, this quality isn’t sustained all the way through the feature, but Super Troopers is still a damn funny film. 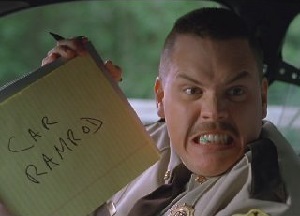 I must admit from the advertising I had seen (and the title) that I had assumed this to be a z class comedy, but it’s not. One of the best aspects of Super Troopers is that the entire cast gets a chance at being goofy. The Broken Lizard team are certainly on the same wavelength as each other, and this is a great collaboration of comics.

Jay Chandrasekhar has done a great job of not only starring but directing Broken Lizard’s first feature, and it can be seen that he was the primary driving force in this project. Of course now I’m interested in seeing Club Dread, even if the reviews have been less than perfect.

The plot’s predictable, and there’s nothing new in this film, it’s just a great collection of new talent (well, new to the cinema anyway… I’ve never seen the TV show).