I actually went into this one with high hopes. For me, 2009’s Star Trek spent too much time establishing that we were in a new timeline, only for 2013’s Star Trek Into Darkness to squander this newfound freedom by slipping into remake territory. Surely the third time’s the charm, right? 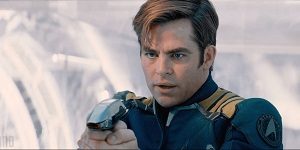 Look, I have no problem with a wham bam action-focussed Trek. They wanna reel in a bigger audience, then they’re welcome to cater to broad tastes. But at least make it a good action film, yeah? Is that too much to ask? Justin Lin has a lot of fun playing around in a three dimensional environment – something he couldn’t truly do in Fast & Furious, I guess – but it’s all for nought because you can’t tell what’s going on. There’s shaky cam, there’s upside down sets, there’s rapid-fire editing and there is ALMOST COMPLETE DARKNESS FOR HALF THE FILM. There were countless occasions where I couldn’t tell whether the characters were falling, jumping or sliding. The filmmaking never gives us a chance to orient ourselves, which means that no one is learning from the lessons shown in Mad Max: Fury Road. And when you realise that this film is all action, all the time, you know you’re in trouble…

So yes, the crew of the Enterprise are halfway through their five year mission. Unlike the TV shows, however – I’m only really familiar with ‘The Next Generation’ – this Trek series seems to spend a tonne of time in highly populated cities. It’s like the producers were worried that stuff happening in space is a turn-off to the average cinema-goer, which is strange when you consider the success of Interstellar or Gravity, so the crew aren’t allowed to simply hang out on their starship for more than a couple of minutes at the start of the film. You never really get a sense of the sheer expanse of space, something TNG excelled at (mostly because of budgetary concerns, I assume). Instead we zap from place to place, often at dizzying speed.

As with the previous two installments, the cast are great. There isn’t time for their interactions to shine, however. Somehow, there’s no time for some slower paced scenes in this 120-minute long film. Some peaks and troughs would have been nice, particularly since the big set piece in the opening act is the only time the film truly stuns. Instead of slowing down for a bit after that, we instead follow with another set piece. And another. And another.

I sound like a Star Trek purist, but really I’m not. Despite complaining like a fuddy-duddy about all the crash bang wallop stuff, wall-to-wall action can work for me (look no further than the aforementioned Fury Road.) Beyond is simply an assault on the senses that had zero emotional impact.