My accidental tradition here at hoopla with Aussie cinema is for me to review the little-known films, the ones that are on our screens for the briefest instant before disappearing, whilst managing to miss the few productions that everyone sees. Thus, I still have yet to see Australia or Red Dog, yet I have reviewed the likes of The Reef, Rats and Cats, Blame and 2007’s Gone. I finally managed to buck this trend by catching The Sapphires a good seven weeks after it came out. 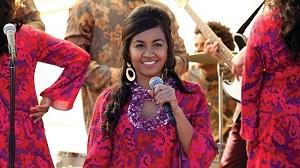 That’s a long time for an Australian film to stay on our screens, and for good reason. The Sapphires is an excellent film that boasts five brilliant performers. Based on a true story, it tells the tale of a quartet of Aboriginal girls who, in 1968, went over to Vietnam to entertain the American troops. Initially spotted by alcoholic Irishman, Dave Lovelace, who never made it as a musician, the group find themselves out of their element in a foreign war torn land, whilst dealing with their own interpersonal issues. The Sapphires is an incredibly ambitious outing. Any film that tackles racism, the Stolen Generation and the Vietnam War is going to have its work cut out. Even more impressive is that fact that the film ends up being such a feel-good experience.

The cast is superb. Though I always enjoyed ‘The IT Crowd’, it never occurred to me that Chris O’Dowd would make such a good dramatic actor, however he’s more than proven himself in the likes of ‘Girls’, Bridesmaids and now this. He finds just the right balance between drunken comical dork and lovable altruist. Deborah Mailman is fantastic, as always. As Gail, she plays the oldest and strongest of the girls with aplomb, even if I was a little confused about her age. Shari Sebbens is wonderful in the role of Kay, a girl who’s managed to ‘pass’ for white most of her life, to the chagrin of the others. Miranda Tapsell (Cynthia) is as hilariously obnoxious as she is diminutive, whilst Jessica Mauboy doesn’t get much to sink her teeth into, dramatically speaking, but is of course the most impressive of the singers. Tony Briggs and Keith Thompson’s screenplay allows for a multiplicity of textured female characters, which is unfortunately quite a rarity these days.

The production values are impressive. It’s easy to see where corners were cut (particularly when we get to Vietnam), but it’s never distracting. The filmmakers masterfully blend stock footage – deliberately obvious stock footage, rather than trying to pretend its something they filmed – with modern visual effects, and the result looks great.

The Sapphires only occasionally feels gauche when it name drops a serious event or topic that deserves more attention. For the most part, however, it keeps an unbelievable amount of plates spinning at once. It’s also hilarious, heart-warming and surprising. An immensely satisfying cinema experience and worthy of the success it’s already received.