You know Disney are confident about their product when they use a word like “Rogue” in the title. In an era where Pacific Rim Maelstrom is changed to Pacific Rim Uprising purely because it’s easier to spell the second option when tweeting, you know we live in cynical times. (Side note: what’s the bet that #RougeOne is trending almost as much as #RogueOne right now?) 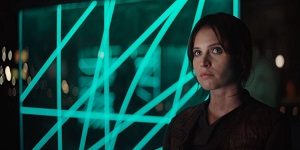 Confidence, however, is the crucial word here, because Rogue One is a film that isn’t afraid to take chances. You get the feeling Gareth Edwards got a once-in-a-lifetime opportunity here: not only does he get to direct a Star Wars film, but he gets to make one that doesn’t relate to the Skywalker family saga. That’s like being given a cheesecake that’s all delicious top layer with none of the boring biscuit base. And whilst The Force Awakens excited us because it felt like Star Wars again after the prequels, Rogue One is exciting specifically because it dares to be different.

The story concerns the bunch of rebels responsible for tracking down the Death Star plans that set things into motion at the beginning of A New Hope. And whilst there is a lot of freedom for writers Chris Weitz, Tony Gilroy, John Knoll and Garry Whitta to create new, interesting characters, the film actually features a helluva lot of connective tissue, elements that tie the film into not just the original but the prequels as well. Easter eggs galore can be spotted here, and only a couple of them feel shoehorned in.

The cast features a fantastic collection of actors. The Star Wars films are certainly addressing the ethnic diversity issue in Hollywood, even if this film is still 90% male. Felicity Jones heads the cast as Jyn Erso, and she’s…pretty good. Her character doesn’t leap out of the screen the same way that Rey did in TFA, and part of me thinks leaving some time for her character to breathe would have improved matters. Going by the teaser trailer, there was certainly a lot left on the cutting room floor; perhaps some of this would have helped matters.

Thing is, Rogue One has a very cluttered first act, and I was having trouble keeping up. 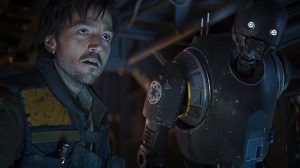 First off, we have a huge array of characters – Diego Luna’s Cassian, Alan Tudyk’s K-2SO, Donnie Yen’s Chirrut Îmwe, Wen Jiang’s Baze Malbus and Riz Ahmed’s Bodhi Rook – but I couldn’t remember any of them by name once the credits rolled. Another aspect that made the film a little more complex than your average Star Wars was the fact that we don’t just have good guys and bad guys; we actually get shades of grey. Aside from Han Solo’s introduction in A New Hope (since neutered in the late-90s re-releases) moral ambiguity is something we haven’t really experienced in this series. Here, this complexity is most welcome, but it also took me a little longer to understand who was on whose side. That being said, it’s hard to complain about finally seeing rebels’ actions feel like the acts of freedom fighters (or terrorists, depending on your point of view.)

This is a crowded film. We have a tonne of characters, and they’re constantly in highly populated areas. This sets it apart from the original trilogy, which regularly presented sparse alien worlds (and something I was glad to see back in TFA.) The new worlds we do see, however, are beautiful. The expanded universe is going to go nuts with all the new races, ships and planets on show, and this is surely something that the fans will lap up.

The best part about Rogue One is there are actual stakes. In fact, I’d say this features one of the best climaxes in the entire saga. It had me on the edge of my seat, such was the desperation on show. You truly get the sense that the odds are stacked against our protagonists, and this is something that will please those who were bothered by Rey’s continuous good luck in TFA. 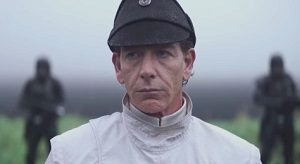 At the end of the day, however, I didn’t have quite as much fun as 2015’s entry. Now, this might be because the novelty factor has worn off (two Star Wars films in two years) or it might simply be because Rogue One is a more complex beast. I do think this film will hold up better through repeat viewings, however.

For all those who want to see a bit more depth in their stories set in a galaxy far, far away, then this is for you. This is a more mature film, and – dare I say it – possibly the darkest and grittiest Star Wars story yet. At best, it’s adding much-needed colour to a very black and white franchise, at worst it’s simply filling in the gaps between the prequel and original trilogies, much like an expanded universe novel or comic used to do.

Stuart spoke about Rogue One on episode 28 of the Chatflix Podcast.