I’ve never seen the Apocalypse quite like this before. You only have to see Will Smith speeding his sportscar through the empty streets of New York in I Am Legend to realise that the destruction of society will come with a few added bonuses. Add to that the fact that you don’t need to worry about littering and can watch films in the cinema alone and Armageddon’s looking pretty cool.

And then comes The Road, the most heart achingly desolate vision of future that I’ve ever seen. Humans are shown as utterly devoid of hope. It’s never made clear what went wrong, but the cataclysm is here to stay, and there’s nothing left but death and misery and… cannibalism. The man (Viggo Mortensen) and the boy (Kodi Smit-McPhee) are survivors. They are travelling to the coast (we’re not sure why), scavenging as best they can. All the animals and all the plants have died, there are periodic earthquakes and wildfires burn all night long. More importantly, humans are hunting humans.

The Road keeps the audience on edge for its entire running time. The film has a slow and measured pace but the ever-present threat of violence and death lurks around every corner. It’s no surprise really, when you consider that John Hillcoat’s previous film was the brutal colonial/western hybrid, The Proposition (which didn’t receive the success it deserved overseas, by the way). The Road takes that unforgiving vision of Australia’s past from The Proposition and magnifies it a hundredfold.

Viggo Mortensen puts in a passionate and desperate performance – this is truly a man whose spirit has been broken many times over – and Kodi Smit-McPhee (who wowed us in Romulus, My Father) is great as his son, a boy who’s had to grow up in this hellish world. There are supporting characters that come and go (the most famous of which are almost unrecognisable), but for the most part it’s up to these two fine actors to carry the entire film and they do it with consummate skill.

Nick Cave and Warren Ellis’ score is good though not as strong as that of The Proposition, for which they were also responsible. The fact that The Road is such a desolate film perhaps demanded that the music never become too invasive, but I would have liked that little bit more. The special effects are fantastic – this beats any of the more glamorous and showy dystopic visions hands down. The cinematography is completely devoid of warm colours (excepting some flashbacks); instead we are shown just how many shades of grey one can create.

Part science fiction, part horror, all allegory, The Road is a stunning film that’s close to flawless. I can’t quite imagine it would encourage repeat viewings, but it’s an unforgettable film.

While it may seem redundant to review The Road so late in its theatrical run – so very long after its US release – and particularly after it received a stunning ZERO nominations for the upcoming Academy Awards, rational voices that recognise the extraordinary qualities of the film must be heard. The Road is a wonderful, wonderful film, that will stay with its audience long after they see it.

Viggo Mortensen is Father, a beat-up, bedraggled, scruffy-looking fellow with eyes that reveal he is beaten by the ravages of the life he has been forced to lead. The world has suffered through a major calamity – much of its life is dead, and the remainder is dying. The few human survivors left are slowly starving, with many forced to resort to cannibalism. Life is cheap, and suicide is a viable alternative. The only hope Father has left is that he will get his Son (Kodi Smit-McPhee) to the South, where things might be better.

Based on the novel by Cormac McCarthy and adapted for the screen by Joe Penhall (Enduring Love), the material is uncompromising, and highly un-cinematic. 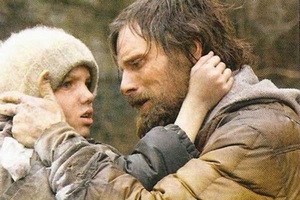 I haven’t read the novel and am aware of the majority of critical opinion that suggests it is the superior experience of this text, however it is hard to imagine this film being the lesser version of anything. As Stuart mentions, this is an extraordinary portrayal of a post-apocalyptic world that removes all the ‘glamour’ from that phrase and replaces it with desolation, destruction and hopelessness.

Mortensen’s stunning lead performance allows the audience to imagine themselves in this barren world and feel its cruelty. His skills have been recognised for a long time after wonderful turns in films such as The Lord of the Rings trilogy, Eastern Promises and A History of Violence, and it seems almost beyond belief that his wasn’t considered one of the five best male performances of the year by the esteemed voters of the Academy. That Mortensen’s turn is matched by perhaps the greatest acting by a child yet seen is the true strength of The Road – this had to be a film of two equals, as Father has decided to place all his hope in his Son, while the Son is almost entirely dependent on his Father, and a lead performance that swamped the other would leave the film unbalanced. Kodi Smit-McPhee borders on astonishing for much of the film, with a maturity and grasp of the material well beyond most actors irrespective of their age.

The landscape and set design, cinematography, costuming and make-up all contribute to the sense of decay, allowing the relative beauty of our world seen infrequently in flashback to truly strike home, while the score is sparse and attentive to its accompanying vision. Sparse is perhaps the best word to describe The Road, with restraint shown in almost all aspects of its production. Perhaps the only minor issue is the film’s pacing: it is clear that director John Hillcoat faced significant difficulty in balancing the demands of the text against those of his audience, and for the most part he succeeds. The film tells the story of two people on a journey from anywhere to nowhere, with only the intermittent interruptions from encounters with other survivors to punctuate the trip. It is hard to imagine it feeling anything other than languorous, and yet Hillcoat has brought it in at just 111 minutes, showing common sense in his estimation of the audience’s ability to tolerate his world.

The Road asks difficult questions, and affords its audience an experience that is neither pleasant nor uplifting, but it is profoundly moving and deeply affecting. Its portrayal of the relationship between father and son is utterly heart-breaking, and the tribute in the end credits “For Louie Hillcoat” probably says it all.