This movie got a bad rap. Original Sin is nowhere near as bad as most reviews led me to believe. Okay, I’m easy to please when it comes to thrillers, but this film had more good points than bad, even if it did nothing new. 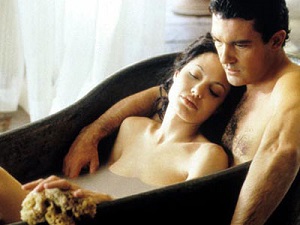 Angelina Jolie is a great actor (yes, I said actor – male actor, female actor, ok? Got it? Now move on), and this film is no exception. So what if she’s not really stretched herself dramatically since Girl, Interrupted? That does seem to be the trend with great actors who begin making heaps and heaps of money. Similarly, I haven’t been really impressed with Banderas since the fantastic Assassins. The two are a great match in Original Sin, however, and I doubt the film could have been made without these two particular actors. (Okay, so it’s possibly to argue that this film has been made with different actors many many times before, there’s nothing new here… but all the same, I’m getting a little too paranoid in my reviews… covering my tracks… watching my step… can’t be too careful… the moment you turn your back POW Mark is working for urbancinefile and I’m out on my arse with no webmaster and only a rudimentary knowledge of Dreamweaver 3.0.)

Um, where was I? Okay, yes this film was quite enjoyable. Whilst I guessed a couple of the twists (they’re kinda obvious) that’s not to say that it wasn’t entertaining. The production design is stunning, and this film can be quite beautiful to look at… and I’m not just talking about Banderas and Jolie gettin’ fleshy – I’m sure you’ve heard about that already. Yes, they have quite a bit of fun early on whilst nekkid, however this is only a small part in the film (he he! I said ‘small part’! Okay, so I’m just jealous of Antonio’s good looks, it’s true).

Oh, and Aussie Jack Thomson is here too, although I seem to remember being more impressed with his American accent in Midnight in the Garden of Good and Evil. He’s not really very important to this film, however. Thomas Jane (yes, that guy you thought was a dick in Deep Blue Sea) is here also, and he does admirably in a role that harboured the most predictions on my part.

Overall this film achieved its goals admirably, even if it got a bit too smug at the end.