In the past, I have been called overly critical of Studio Ghibli’s output. The Castle of Cagliostro (not Ghibli, but close enough!), Whisper of the Heart, Princess Mononoke, Spirited Away, Howl’s Moving Castle, Tales from Earthsea, Ponyo and Arrietty…they’ve all left me disappointed by the time the credits rolled. If you go through the Ghibli catalogue, however, you’ll see that there some films I absolutely adored. First and foremost is My Neighbor Totoro (a masterpiece, in my humble opinion), but there’s also Grave of the Fireflies, The Wind Rises and When Marnie Was There; they are all films I thought were brilliant. Now, I can add Only Yesterday to that list. 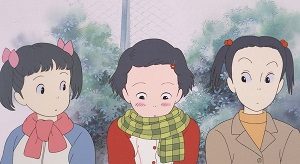 The film was directed by Isao Takahata, he of Grave of the Fireflies fame, but before you start sobbing in despair at the mere mention of that film, let me assure you that this film is not in the least bit traumatic. The film follows 27-year-old Taeko, a Tokyo office worker who takes a holiday in a country, visiting her brother-in-law’s family in order to not only take a break but help with the safflower harvest. Whilst there, she reminisces about her youth back in 1966.

As far as a plot goes, that’s just about it. The flashbacks are episodic in nature, and are actually the only parts of the film taken from the source material, the manga title by Hotaru Okamoto and Yuko Tone. But they are so true to life, full of the innocence and heartache of youth that it’s impossible not to be affected by such scenes. I’d be hard-pressed to even suggest that the film has any particular themes or driving narrative. In true slice-of-life fashion, it feels like we’re dropped straight into Taeko’s story, then depart before it’s truly finished, but you still leave the film immensely satisfied.

The non-conventional nature of the film perhaps explains why it wasn’t even released in the west until 15 years later, in 2006. And even then, no English dub was commissioned until 2016, which is why the English audio track on this new disc includes the likes of Daisy Ridley and Dev Patel.

The animation is beautiful, as you’d expect from Ghibli. The flashback sequences look more like storybook illustrations, with the colours drained from the edges, whilst the present-day scenes are as vibrant and detailed as you’d expect. The Blu-ray presentation is stunning, with some brilliant features. The interviews with the English voice actors (Ridley et. al.) aren’t particularly interesting, but the 16-minute interview with the dub team is much more entertaining, as they talk about the difficulties they have translating the Japanese. There’s a 45-minute Japanese doco which is equal parts cute and informative, whilst you also get the entire storyboards and the ability to watch them picture-in-picture.

When it comes to the Studio Ghibli catalogue, this is the perfect example of a hidden gem. It mightn’t entrance kids as much as some of their other films (although maybe I’m not giving them enough credit) but it’s well worth your time.

Only Yesterday is available now on DVD and Blu-ray from Madman.

←The Secret Life of Pets Inferno→