One day, people will look back and remember a time when Tom Cruise was one of the most bankable of stars, a time before Oprah’s couch and a string of so-so flicks diminished his lustre. Occasionally we are reminded still of his natural ability to hold the attention of his audience, and so it is with Oblivion, a science fiction film full of recycled ideas that remains utterly watchable throughout.

Cruise is Jack Harper, maintenance man on a destroyed earth, tasked with repairing the security drones that defend the energy mining apparatus of humanity’s last hope. Invasion and war have left Earth essentially uninhabitable, and the remaining folk need the energy to power the new colony on Titan, the lagest of Saturn’s moons. The invading scavengers (‘scavs’) are a constant threat, but Jack will find more than he’d imagined when his curiosity about his mission takes hold.

For anyone familiar with science fiction there will be few surprises, although it is clearly intended that the audience uncover each new piece of the puzzle as Jack does. There are ideas here that are explored in many recent and not-so-recent sci-fi films, and in many cases those films do it better. The most obvious is Moon, the remarkable film directed by Duncan Jones in 2009, yet there are innumerable references scattered throughout. Hell, there’s even a nod to Independence Day. The outstanding thing about Oblivion, however, is that the familiarity of the themes and the lack of surprise at the turns taken by the plot still don’t diminish the enjoyment of the film.

Much of the credit must go to the production design and visual effects, as this is just a beautiful film to look at. Audiences will be thrilled by the depiction of a ruined world, and the action sequences featuring Harper in his flying machine are as exciting as they come. This is truly a film to see on the big screen, and the bigger the better.

Oblivion sees Cruise at the top of his game, and it is his charisma that is the other factor in the film’s success. When compared with his by-the-numbers approach to the rather laughable big-screen adaptation of Lee Child’s Jack Reacher in recent months, it isn’t hard to imagine with which project he had most fun. He really sells the action and intrigue, and it is impossible to remain unmoved both by Harper’s plight and Cruise’s skill in making us care

The best of science fiction explores humanity and its foibles, and while Oblivion isn’t a genre-redefining piece, and it doesn’t say anything profound, it remains one of the better of recent screen sci-fi thrilers.

Have to agree with my learned friend here: Oblivion is a film that gets many things right, but originality isn’t one of them.

It’s rather astounding just how many science fiction films Kosinski’s second feature ‘borrows’ from, and to list them here would be akin to spoiling a number of the narrative twists and turns. What’s more, these include recent sci-fi films, not just classics. The only time Oblivion manages to surprise is because the plot seems so predictable that you think the story couldn’t possibly be going in the direction it seems to be. But alas, it is.

Cruise’s films have been met with varied success of late: Mission: Impossible – Ghost Protocol was a sure hit, Jack Reacher was moderately successful, whilst Knight and Day and Rock of Ages were met with critical disdain and middling to awful box office results. 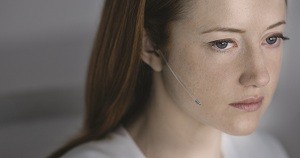 Here, as Mark said, Cruise is firing on all cylinders. His portrayal of Jack is eminently watchable, and he handles the action with ease. Andrea Riseborough is also impressive, whilst Olga Kurylenko doesn’t get anywhere near enough lines (as is often the case with her roles).

Like Tron: Legacy, the visual effects are brilliant. Everything looks real and tangible, and not once was I bothered by dodgy effects. The comparison between the last film I’d seen, Olympus Has Fallen, and this could not be more profound.

The score, courtesy of Anthony Gonzalez, M.8.3 and Joseph Trapanese is, to my ears, very similar to that of Tron: Legacy, and in turn to that of Inception. Coincidentally, I had only moments earlier been saying how happy I was that trailers had stopped stealing from the Inception audio department, when I was assaulted by the opening notes of Oblivion, which took us right back to the BRRRRRRRAAAAAWWWWRWRRRMRMRMMRMRMMMMM that we all know so well.

It’s clear that Oblivion will find an audience. Fresh faced younger viewers and non-sci-fi geeks will probably be surprised and challenged, others less so. It really depends how willing you are to overlook the obvious lack of originality, because on its own terms, the film is excellent. It’s just so damn hard to separate it from so many other well-known films.

←Warm Bodies The Company You Keep→