Most people will no doubt see Lars von Trier’s Nymphomaniac films in tandem, however I thought it necessary to review them separately. 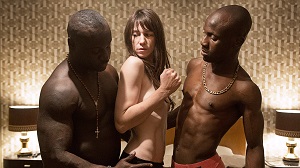 Vol. II spends only a little time with the teenaged Joe, continuing the mostly comedic tone of Vol. I. Soon, however, Charlotte Gainsbourg takes over from Stacy Martin, depicting the adult years of her life. And this is where the film gets decidedly darker.

Von Trier of course has a penchant for mixing bleak drama with comedy. Here he does the same, with less than perfect results. Part of the problem is that it’s much harder to sympathise with Gainsbourg’s Joe than it was with Martin’s. Joe’s self-loathing reaches new peaks in Vol. II (though thankfully, not manifesting the same way it did in Antichrist) and through it all, she wears a pained expression that has a tendency to become tiresome.

It also gets frustrating. Whereas we could dismiss Joe’s confusion at her own unbridled desire when she was younger, as a grown woman it’s easy to get impatient with her. A sequence in a sex addict help group doesn’t seem to go anywhere, whilst the present day discussions between Joe and Seligman are less interesting and more like annoying distractions.

One thing that really impresses in Vol. II are the scenes Gainsbourg shares with Jamie Bell. His character of K provides a specific service, the kind that no one else can, and his scenes crackle with ominous tension. Of course, it’s been a long time since Billy Elliott, but all the same, Bell does surprise in a wonderfully fiendish role. Don’t be surprised if you see him specialising in villainous portrayals over in Hollywood somewhere down the line.

At the end of the day, Vol. II is unsatisfying. It meanders to a conclusion, and the presence of a montage of Joe’s life towards the end doesn’t go far enough in making us feel like we’ve arrived anywhere in particular after this oh so very long and circuitous journey. The entire Nymphomaniac experience didn’t really need to be four hours and ten minutes. The fact that von Trier’s ideal version of the film was even longer makes me wonder at the relevance of any of the stuff left on the cutting room floor. Feature film explorations of female sexuality are few and far between, so that’s one reason to recommend the two films. Other than that, it’s for von Trier über fans only.

←Nymphomaniac Vol. I The Raid 2→