Let’s be honest: we’re all keen to see the newest chapter in the Tom Running Really Fast saga. Lately, his features have been consistently entertaining, even if he was miscast (Jack Reacher), the story was über-derivative (Oblivion) or the film was poorly marketed (Edge of Tomorrow.) With Mission: Impossible’s fifth outing, Tom yet again gets the job done, but the real star is writer/director Christopher McQuarrie. 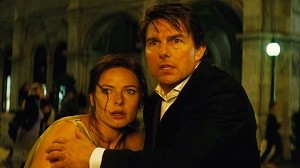 To describe the plot of Rogue Nation would be to sell the film short. Suffice to say that this film addresses the mysterious ‘Syndicate’ that was mentioned early in the series, and yet again involves Ethan and co. breaking all the rules in an attempt to put an end to their nefarious schemes. The heists mightn’t be as meticulously orchestrated and there mightn’t be as many double-crosses going on, but the action is breathtaking and the dialogue razor sharp.

There’s more than just witty repartee being spat back and forth here. McQuarrie’s script actually has depth to it, not to mention classy symbolism and clever narrative symmetry. Some of the dialogue concerning ‘statecraft’ feels like it’s come out of a John le Carré novel, and the idea of secrets embedded in black ops embedded in plausible deniability seems disturbingly realistic. And to top it all off, he references Hitchcock’s remake of The Man Who Knew Too Much in a crucial scene.

Cruise does a good job in some particularly challenging moments – and the script really takes Ethan Hunt to the brink – whilst Simon Pegg gets to be more than just comic relief. Jeremy Renner’s character still feels superfluous, whilst Ving Rhames is mostly concerned with wearing his hat on a jaunty angle. Rebecca Ferguson gets saddled with the sole female role this time around, but it’s a really well written one. Despite what the marketing material suggested, she’s more than simply eye candy, and her action scenes are written and performed in a believable fashion, something that The Dark Knight Rises failed miserably at when it came to Catwoman.

I have no idea what Cruise is like in real life, or indeed what kind of real power he has in Hollywood. 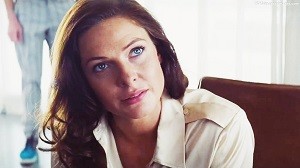 But his choices consistent impress. He regularly appears in films that do what’s right for the story, rather than focus on making their star look good, and perhaps that’s what worked so well with Edge of Tomorrow and now Rogue Nation – he was prepared to have the other actors step up to the plate instead of hogging the limelight for himself.

Once again, the marketing department made a big deal about Cruise doing stunts for real, and yet we have the same problem as with Ghost Protocol and the Burj Khalifa: even though I know it was real, it doesn’t look any different from your average action film. In both situations, they needed to utilise wide shots, which meant we might as well have been looking at a stuntman. I guess it sells more tickets, but it’s not really that big a deal when you’re in the cinema; some nifty compositing and they could have simply shot it in a studio.

Rogue Nation is great, intelligent fun. The dialogue has real heft to it, and the main stars are firing on all cylinders.