I read Andy Weir’s novel in preparation for the film a couple of months ago, and was blown away by how damn entertaining it was. It was one of those good (and perhaps rare?) moments where you can understand just why the book became a best-seller. I also recognised how it could make a decent film with very little tinkering.

And a decent film it is, as Ridley Scott delivers his best feature in a very long time. 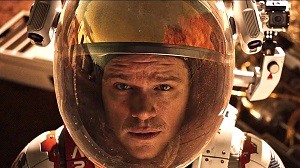 It’s hard not to watch The Martian and wish the script for Prometheus had been this good. Screenwriter Drew Goddard (who was previously going to direct before leaving for the Sinister Six movie which failed to launch) distils the best stuff from the book, making it much more of an ensemble piece than the source material was. It pains me to say that in this case, “the book was better than the film,” because it’s the kind of annoyingly unhelpful statement you hear people saying all the time. But in this case, yes, the book was better. The film is still rather excellent, however.

For those who don’t know, Matt Damon stars as Mark Watney, an astronaut left stranded on Mars after the rest of the crew have to leave in a hurry. As the only man on the entire planet, he has to find a way to not only contact Earth but to survive for years on dwindling supplies.

The book got in a great rhythm of problem/solution, problem/solution. It really was a book about a botanist/engineer using his brain to survive against the odds. Understandably, quite a bit of this gets ditched. Because nobody wants an eight hour film, there are a number of mini-disasters that get skipped. Proportionally speaking, the film spends a lot more time with the NASA people and the crew returning to Earth than the book did, so that once we’re over the halfway mark, there’s a lot less Damon on screen. All this is fine; it just didn’t feel like the marathon of survival that the book was.

Damon is perfect as Watney, and his casting seemed like a no-brainer. 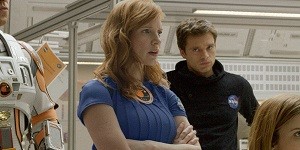 He did witty, sarcastic genius back in the days of Good Will Hunting, and he hasn’t lost the knack. Jessica Chastain is good yet reserved as the captain of his crew, Lewis, whilst Kate Mara does excellent work as Johanssen (and is probably thankful that this film turned out better than Fantastic Four.) Other standouts are the always-incredible Chiwetel Ejiofor as mission director Vincent Kapoor and relative unknown Mackenzie Davis as a satellite planner at Mission Control.

The film is brilliantly paced – the 141 minutes felt anything but – and the production values are exceptional. Scott is fantastic at his science fiction world-building, and The Martian is no exception. The VFX are excellent and Dariusz Wolski’s cinematography is suitably epic without ever drawing attention to itself.

I didn’t want to keep harping on about the book, but the film does have a couple of diversions that bugged me. The most important was something that Weir obviously discounted as too unrealistic and over the top, a concept that Hollywood has no qualms about whatsoever, it seems.

The Martian isn’t quite the white knuckled breathless rush that Gravity was, but Damon wrings real emotion out of the dramatic moments. Between Gravity, Interstellar and The Martian, it seems stories of astronauts are having a resurgence at the moment, and I get the feeling that taxpayers might be more positive about throwing tonnes of money at the prospect of space travel after the doldrums of the 1990s and 2000s.

←The Visit Learning to Drive→