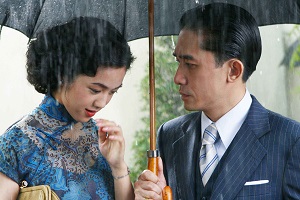 Tang plays Wong Chia Chi, a university student who joins a group of amateur resistance fighters, determined to bring about the downfall of the Japanese occupation. This leads her to Mr. Yee (Tony Leung Chiu Wai). The caution mentioned in the title refers both to the precarious nature of Wong’s mission, but also the fact that Yee is paranoid of assassination, living in a fortress and always accompanied by several guards. The lust of course refers to the increasingly intimate nature of their encounters.

Lust, Caution is a thoroughly entrancing if slow paced affair, but like most of Lee’s films, once it finishes it leaves you feeling a little cheated. I expected something… bigger. There are several brilliant scenes, but it overall it was a little too understated for my tastes. Of course, The Hulk was anything but understated, and disappointing all the way through, so I’m not easy to please.

One of the main problems is our heroine, Wong. We’re never given any hint as to why she’s prepared to go to the lengths she does. Her work becomes more and more dangerous, and her infiltration of the Lee family is nigh flawless, but I never knew why it was she was willing to go so far. Leung is great, tempering moments of cold-hearted stoicism with an almost childish meekness. The sex scenes are fairly graphic, but didn’t feel overly gratuitous. The almost sadistic nature of them is more than a little disturbing, however, as the sex is often initiated through acts of violence.

As a slow burn thriller, Lust, Caution works rather well. At 157 minutes it can be trying, and the denouement is rather disappointing after all the hard work put in by not just the cast and crew, but the audience.