I was about an hour into this film when I thought to myself, “This feels a lot like Dogtooth…” At which point I checked IMDb to discover that this is indeed the work of Yorgos Lanthimos – his third feature since Dogtooth took the festival circuit by storm. 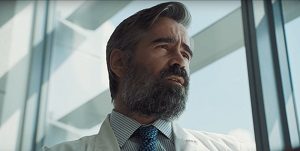 Steven (Colin Farrell) and Anna Murphy (Nicole Kidman) lead a strangely clinical life. Though successful by any other metric, they speak as if detached from reality, and when they have sex it’s completely without intimacy. Steven’s a successful heart surgeon, but he’s been seeing a boy named Martin in secret.

From here, the Murphys’ lives spin slowly out of control. The cinematography perfectly sells such entropy. The film is filled with lots of super low or super high angles. The characters constantly find themselves in big, empty and soulless buildings. In fact, the preponderance of slow zooms and wide angle shots with nary an extra in sight reminds me of the thrillers of the 70s (Coma; The Conversation).

The soundtrack perfectly accentuates the off-kilter storytelling. Overseen by Johnnie Burn and Simon Carroll, it’s a mixture of classical and modern pieces, with an emphasis on discordant, drawn-out notes. It’s not an exaggeration to say that a good 70% of the film’s success hinges on their work here, because otherwise the film’s best scenes would come across as silly.

The DVD presentation is very good, and it comes with the standard electronic press kit-type interviews with the stars and director. It’s the latter that’s the most interesting. Him speaking on the genesis of the project is particularly pertinent for those of us who wonder how on earth someone comes up with such a strange narrative.

We’re in familiar territory for Lanthimos here, and perhaps that’s what holds The Killing of a Sacred Deer back. See, this would have worked quite well as a straight thriller: an agent of chaos (read: Martin) upsets a perfect family and their perfect life. But because Lanthimos is…well…Lanthimos, of course Steven and Anna are strange to begin with. This detracts from any plot developments. Had Anna and Steven’s life been more relatable, the film would have been more unsettling. Instead, I was holding the characters at arm’s length from the very beginning.

The first two acts are a masterclass in tone and rising tension. Once we get to the third act, however, there’s nothing left but for the film to putter across the finish line. If you’re a fan of Lanthimos’ previous work – or avant-garde thrillers generally – this will probably hit the spot. Others may find the destination less impressive than the journey…

The Killing of a Sacred Deer is available now on DVD from Madman.

The Killing of a Sacred Deer