Jack “But I’m just an analyst!” Ryan is back in Shadow Recruit, the second rebooting of Tom Clancy’s creation. Unlike the previous four films, this one is not based on a novel but is an original screenplay. 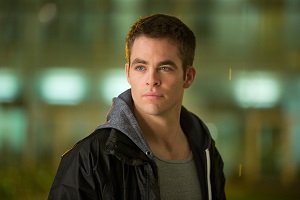 Chris Pine plays Jack here, and whilst I don’t have a problem with the actor per se, I do find him kind of bland. He gets the job done, but it goes without saying that he can’t come close to Harrison Ford’s performances in Patriot Games or Clear and Present Danger. His work is probably equal to that of Ben Affleck in The Sum of All Fears.

After a brief glimpse of Jack’s marine career that was cut brutally short, the film covers his recruitment as an analyst for the CIA. As expected, it isn’t long before this office worker is embroiled in all sorts of secret agent hijinks, with bullets whizzing over his head and car chases galore, all tied together by a sinister plot involving – no joke – financial terrorism.

The first half of the film is great. As an origin story, Shadow Recruit lays down the groundwork for the interesting character that Jack will become. He’s been denied the right to fight for his country as a marine, so he feels like he has something to prove right from the get-go. His burgeoning romance with Cathy Muller (Keira Knightley) is handled well, even if it doesn’t get quite get the screentime that it requires.

In fact, a lot of the good stuff seems to be hastily touched upon in an effort to get to the action. Director Kenneth Branagh’s deft hand is present throughout all the scenes that involve actual dialogue, but the action scenes are lacklustre in comparison. What’s worse, they’re shoddily edited. There were half a dozen moments where I knew something awesomely entertaining had just happened, but I couldn’t actually see it as the film is edited to exclude any of the actual action. It’s as if they didn’t hire stunt performers, so simply had to shoot around the violence.

This means that, by the time we get to the high-octane conclusion, the film really fails in a big way. Patriot Games may have been deliriously over the top come the final act, but at least it was fun to watch. Shadow Recruit gets lost in a mess of dodgy editing and bad visual effects.

It’s all so frustrating, because the dramatic and thriller elements are wonderfully handled. Pine might be less than perfect, but the rest of the cast are fantastic. Branagh also puts in an appearance as antagonist, Viktor Cheverin, and his scenes have a wonderfully palpable menace to them. Kevin Costner does a good job as Jack’s sensei too.

At the end of the day, Jack Ryan is a film hobbled by a) its need to be action-packed, and b) the fact that said action is woefully executed. It’s a decent time-waster but really feels like a missed opportunity.

←The Book Thief Paranormal Activity: The Marked Ones→