It’s a common complaint that Hollywood doesn’t produce any mid-budgeted movies these days. We have $200 million superhero movies, we have micro-budgeted indies, but we rarely get anything in between. The thriller, once common on cinema screens up until the late 90s, hardly ever gets a look in. Well, in the last month I’ve seen Inferno and now Jack Reacher: Never Go Back, budgeted at $75 million and $60 million respectively. And both were rubbish. 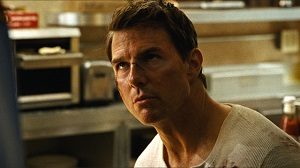 Despite seeming like a bizarrely leftfield casting choice, Tom Cruise did a good job in 2012’s Jack Reacher. Writer/director Christopher McQuarrie proved to be up to the task, and the film felt refreshing precisely because this genre had fallen out of favour. The prospect of seeing Cruise again fill Reacher’s shoes seemed a great idea.

Let’s get this out of the way: the only good thing about Never Go Back is the presence of Cobie Smulders. As Major Susan Turner, she kicks all sorts of arse. This, combined with her performance as Maria Hill in the Marvel Cinematic Universe should really be enough to prove that she needs her own franchise. Please, Powers That Be, make this happen.

Meanwhile, Reacher the drifter is once more embroiled in a case of bad guys doing bad things. When the title of the film was first announced, I was surprised at the number of Lee Child fans proclaiming that ‘Never Go Back’ was their least favourite Reacher book, but now that I’ve seen the end result, I can’t say I’m surprised. To be fair, the opening ten minutes or so sees the plot whirring along at a nifty pace, and I was impressed at the ease with which we leapt straight into the story.

Overall, however, this is as close to a straight-to-video 80s action movie as you can get. The bad guys are bland, their evil plan is bland, and the action scenes are bland too. In fact, I was stunned to learn that even the cinematography on show here was completely lacking in sophistication. Halloween in New Orleans sounds like it would be an interesting backdrop for action/thriller, but apparently not here.

The decent box office – $112 million and counting, double the budget – means that we may still get a third Reacher film, but there’s going to have to be a marked improvement in the story and character department before I’d consider making the trip to the cinema.