I’m pleased to announce that Pixar are back in the game after the middling efforts that were Monsters University, Brave and Cars 2. Inside Out isn’t a perfect film by any means, but it’s close to Up in terms of being one of Pixar’s most mature features. 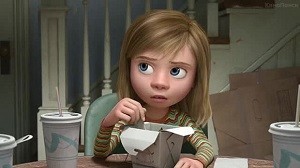 The premise is about as high concept as kids’ movies get: the film takes us inside the mind of 12 year old Riley, a girl who’s just moved to San Francisco with her parents and is trying to fit in at her new school. We spend most of the time with her emotions – Joy (Amy Poehler), Fear (Bill Hader), Anger (Lewis Black), Disgust (Mindy Kaling) and Sadness (Phyllis Smith) – as they stand by the control panel, taking turns at navigating Riley through life.

The setup is actually quite complex, and it’s impressive just how much thought has gone into the mechanics. The film explains the rules in the pre-title sequence, but never really stops developing the concept further. The screenplay has the emotions visit Riley’s long term memory, subconscious, abstract thought and imagination, and I had difficulty struggling to keep up at times.

I can imagine that there were a lot of ideas left on the cutting room floor. The film successfully strikes a tricky balance, however it spends a surprisingly small proportion of time in the real world, and part of me wishes this wasn’t the case. Since we spend so much time inside Riley’s head, we don’t really get to hear her talk much at all, which is a pity. That being said, I think Pixar did the best they could with such a challenging concept.

Visually, the film is…so-so. I didn’t love the character designs of the emotions, and some of Riley’s intellectual landscape is a little too whimsical for my tastes. The animation itself is great, but there were no moments that made my jaw hit the floor, like the first time we saw Carl let fly his balloons in Up, or marvelled at the rust-coloured ruination of WALL-E‘s world.

The mixture of emotions this film manages to tap into is extraordinary, and I was on the verge of tears more than once. Out of all of Pixar’s catalogue, Up would have to be the most tonally similar. Inside Out is a film not just about growing up and negotiating an increasingly complex world, but an examination of depression. Significantly, the film doesn’t offer any simplistic answers, and makes it clear that there is no shortcut to happiness. Hilarious and never dull, Inside Out is a surprisingly heavy cinematic experience.