Coming hot on the heels of the far superior Brokeback Mountain, it seems unlikely Imagine Me & You ever had much chance of success – the only thing that differentiates it from any other romantic comedy is the romance is between two people of the same sex (shock, horror!). It appears likely that was felt to be enough, but the lack of anything original leaves it disappointing at best. Piper Perabo (Rachel) seems stuck in the same rut as Reese Witherspoon before her… forever the sweet-as-pie romantic lead in films such as Coyote Ugly, Perfect Opposites (A Piece of My Heart), and The Adventures of Rocky & Bullwinkle. Here she appears, yet again, as the good-natured, do-the-right-thing girl, determined to make the lives of both her and her husband perfect, but she is thwarted by a love at first sight that comes upon her, of all times, as she is walking down the aisle!

Sporting an English accent that is actually rather good, Perabo is her charming, adorable self, but one wonders if she is getting tired of playing this role. Thankfully, she is countered by Lena Headey as Luce, whose presence creates such havoc in the settled lives of the central couple – Headey is excellent, showing just enough charisma but also the internal conflict that her feelings for an unobtainable woman must cause. Headey is not only beautiful, she steals most every scene she is in, her performance the standout amongst so much more of the same.

The truly disappointing part of Imagine Me &amp You, is that when you remove the ‘issue’ that the same sex ‘twist’ creates for the leads, there really isn’t too much left to this tale; the remainder is (sub)standard romcom fare. The central question in any romantic comedy is ‘How will they end up together, in spite of everything seemingly preventing it?’, but Imagine Me & You sidesteps that question, offering up only an unlikely happy ending that seems as unrealistic as it is cheery. Sure, everyone is happy, of course they are; no-one ever gets hurt in a real-life drama of this nature.

Imagine Me & You is also either quite misguided or rather dishonest – the problem of Rachel and Luce being of the same sex is alluded to by Rachel’s mother, (who delivers a few horrified ‘my daughter isn’t a lesbian’ lines), but dismissed readily in favour of the happy ending. Either writer/director Ol Parker felt this to be an issue or he didn’t – if not, and he was trying to make the point that an attraction between a same-sex couple should be seen as just as romantic as one between a man and a woman would, (and, in other words, unremarkable of itself), why introduce what are essentially throw-away moments questioning that fact? (The customer in the florist shop is a good example.) If, on the other hand, the fact they are of the same gender is important in Parker’s view, why does he deal so poorly with it? He can’t have it both ways…

The relationship building phase in the first half of Imagine Me & You is quite charming, and contains some great scene ideas – the supermarket scene is amusing, and the schmaltz of the romance between Rachel and Luce is just enough to make this unabashed romcom fan smile – it is really the disappointing third act that lets it down. Had the issues that a love triangle creates, (irrespective of the gender pairings within it), been more maturely dealt with, the film may have been more successful.

I’m surprised this flick didn’t get the romcom king’s tick of approval. Sure, there’s nothing new here (okay a little bit of same sex attraction), but a perfect script and fantastic performances make for a brilliant piece of escapist romance. 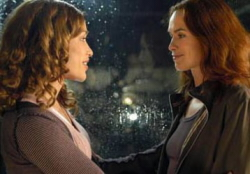 In a rather surprising move, there’s very little commotion sparked by the notion of lesbian attraction within Imagine Me & You. The conflict arising from this forbidden love is in only related to the fact that one of them is married. For me this was actually refreshing, especially since it appeared on screens so soon after Brokeback Mountain.

All the leads were fantastic. Perabo shines in a role that does her justice in a way The Cave certainly didn’t, and Lena Headey is the perfect match for her. The chemistry between the two is palpable, and the blurring between friends and lovers masterfully handled. Matthew Goode, whom I saw more recently in Match Point, is great, and his performance allowed us to sympathise with him, even in the capacity of third wheel. Anthony Head (Giles from ‘Buffy’) puts in a significant performance also as Rachel’s long suffering father. Seeing him dance to ‘You Spin Me ‘Round (Like a Record)’ is priceless.

Not only is the script watertight, but Imagine Me & You doesn’t opt for the easy way out, something that is often the bane of romantic comedies. I thought the notion of the love triangle was dealt with perfectly, and in manner eschewed by other less impressive examples of the genre (recently Must Love Dogs and Just Friends spring to mind). It’s hilarious, fast paced and immaculately performed.

If you’re going to stick to genre traditions, then you better do it better than most of the rest of ’em. Imagine Me & You does just that.