A sometimes black, sometimes absurd but mostly heartfelt comedy, Hunt for the Wilderpeople is yet another successful film from director Taika Waititi, who’s currently working on Thor: Ragnarok for Marvel. 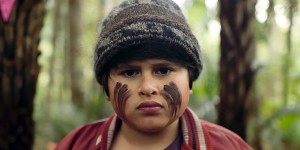 Young Ricky Baker (Julian Dennison) doesn’t have high hopes for his umpteenth foster family. Bella’s (Rima Te Wiata) a big dork, whilst gruff Hector (Sam Neill) barely speaks a word. Circumstances throw the Ricky and Hector into the wilderness together, however, and despite their best intentions, they set off on an adventure that will have massive repercussions for both of them.

Hunt for the Wilderpeople starts out strong, with possibly the funniest opening 15 minutes I’ve seen in a long time. If you’ve seen Waititi’s other work, like What We Do in the Shadows, Eagle vs Shark or Boy, you know that he has a deft touch for finely-tuned awkward comedy. The genius thing is the gags never feel cheap, and the film always treats its characters with respect.

Dennison and Neill work brilliantly together, the grumpy old man meets try-hard juvenile gangster shtick providing a lot of mileage. The authority figure duo of Andy (Oscar Kightley) and Paula (Rachel House) score some of the film’s funniest lines too. They practically deserve their own spin-off.

The film looks stunning, and it’s clear that Waititi can potentially bring something unique to the MCU, should the powers that be let him. The visual effects are fantastic, and of course the landscape of New Zealand is always stunning to behold on the big screen. The score, courtesy of Lukasz Pawel Buda, Samuel Scott and Conrad Wedde also deserves a mention, alternating between Danny Elfman-like choral work and some retro synthwave.

The last third of the film, however, doesn’t raise the stakes or even take us anywhere new. The most disappointing aspect would be that all the good stuff is at the front of the film. I wouldn’t say it’s a failure; more that the film isn’t sure how far to take things. The end result is both over the top and strangely underwhelming.

Touching and hilarious, Hunt for the Wilderpeople is quality entertainment, even if I wouldn’t rush out to see it a second time.

Hunt for the Wilderpeople