There are those for whom the Harry Potter series of films has been a resounding success, while others – more sensible like myself, of course – have often complained at the films’ ridiculous lengths and their intention to retain as much of the books’ details they could rather than cutting and pasting elements to make the novels into credible films. Strangely enough, this sixth installment is the least rigidly faithful to its source AND the worst film of the lot.

The return of Lord Voldemort that seemed obvious to most since Harry first marvelled at Hogwarts’ wonders has finally come to fruition, and Death Eater attacks on magical and muggle alike have both worlds scared for the future. Harry, Ron, Hermione and their friends, however, are far more concerned with ‘who snogged whom’, and face some difficult moments in their new year at school. Love potions and Quidditch tryouts will offer them some distraction from the nasty unravelling of their world, while Draco Malfoy will have a momentous decision to make after being personally chosen for a great task by the Dark Lord himself.

What is truly irritating about this steaming cess-pool of a film, is that the sixth of J.K. Rowling’s novels contains enough character information to make a truly great film. Decisions have been made to include certain plotlines and excise others, and yet somehow what makes it to the screen is potentially the least interesting film that could possibly come from that source. It’s actually rather astonishing that it could be this bad.

The many problems start with the film’s pacing – dedicating half a film of 153 minutes to the dullest of teenage anxieties may appeal to a scattered few of its youthful audience, although on the evidence presented at my screening this appeared unlikely. Storm clouds brewing over Hogwarts and the knowledge of Voldemort’s return apparently don’t give these horny little devils even a single moment for pause – that anyone thought this could work is barmy. The will-they won’t-they material between Ron and Hermione and Harry and Ginny Weasley is tired and uninspired, and one could be forgiven for just not caring. That another more boring coupling than Harry and Ginny could be presented as romantic comedy – essentially what the rather bizarre start of this film appears to be aiming for – is questionable. When the film finally gets to the [hor]crux of the matter, it races through with nary an explanation to a finale so rushed many may struggle to accept the arrival of the credits, finalising as they do the outcome for one of the most beloved of Rowling’s characters.

There is certainly enough character material included, but it seems largely misplaced – the best example is the remarkable torment Draco Malfoy must experience that is barely examined. Although this film could well have worked as an exploration of ego vs conscience and an understanding of the greater good, none of this translates, with only lip-service paid to its best example’s anguish.

The release of this film was held over for many months, and the evidence for what was achieved in this period is just not on the screen. While there are some exciting moments of airborne dark magic – the opening attack on London is probably the best of the film – there are still several glaring CGI failures that makes one wonder why David Yates couldn’t get it right with unlimited resources and almost an entire year longer than planned. Wizards on broomsticks just don’t move in the way they have been animated during the obligatory Quidditch scene. The remaining action sequences engender none of the thrill they intend, with the attack on the The Burrow completely failing to make the most of its setting, while the battle near the end of the film appears an afterthought.

While performances are generally adequate, the only real standout is Jim Broadbent as Professor Horace Slughorn. Broadbent is wonderful in his role as the conflicted former mentor to Tom Riddle, and the only scenes that even remotely work are those that feature him. A cavalcade of cameos seems designed only to provide fodder for the inevitable supporting character deaths in the final films to come, adding barely anything to this film or its story.

The news that the final book is being filmed in two parts by director David Yates must be the final nail in the coffin for anyone wondering whether these films are being made for art or money. One can only hope the obvious problems with splitting the final novel into two in terms of pacing – is the first film just going to feature Harry, Ron and Hermione camping out? – can be overcome.

A long, boring, uninspired treatment of a far better text, Harry Potter and the Half-Blood Prince will probably appeal only to the very naive early- to mid-teens it appears to be targetted at. For all others, don’t waste your time…

I must admit, when I first saw the trailer for this film, I kinda felt like I was over the whole Harry Potter thing… Has there ever been a single narrative told over this many films? I can’t think of any. Like the later books themselves, the franchise just seems to be going on and on…

Imagine my surprise, then, when I found myself totally hooked by this latest effort. It’s a fascinating entry to the series – thoughtful, patient and haunting – and possibly the most cinematic of them all. One thing is for sure – kids aren’t going to like this one much. This is easily the most adult thus far, and all the eccentricity and playfulness has disappeared in favour of a measured character piece. 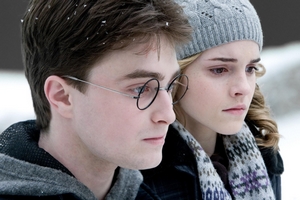 Believe it or not, there’s very little magic on show here. Well, very little of the showmanship side of magic. Incantations are kept to a minimum, wand waving is completely without extravagance and whenever magic turns up it’s terrifying and powerful, rather than comical. It’s interesting that the characters don’t announce their spells as often as they used to, because the film’s primary concern is with the power of words. Severus Snape makes an unbreakable vow, Harry learns a new spell with dire consequences and Albus Dumbledore gets Harry to make a very serious promise. And there’s more, as Harry, Hermione, Ron and Ginny find themselves facing the power of each other’s words amidst a chaotic flurry of teenage hormones.

The kids step up to the plate admirably, finding emotional depth that hasn’t been required up until now. Whereas many thought that Rupert Grint was the best of the three in the earlier films, Daniel Radcliffe and Emma Watson are the ones that truly impress now. Bonnie Wright is fantastic as Ginny, also, who’s quite an interesting character (much more so than I remember from the books). She’s very mature for her age and clearly in control – so much so that she puts the older kids to shame. I couldn’t ever figure out the attraction for Harry in the books, but here it seems to work.

This is such a desolate, sparse film that I can imagine many people being disappointed. Gone are the constant, unnecessary special effects – no floating staircases, ghosts, and barely any moving paintings – instead Hogwarts is a bleak and cold fortress that doesn’t even echo the sights and sounds of its former glories. It’s almost a pity the series went ‘dark’ from episode three, because The Half-Blood Prince has to work that much harder to become even less upbeat.

I really loved this film, and I think that in time audiences will enjoy it for standing out amongst the others, for being that little bit different. It has quiet moments, something that has often been found lacking in blockbusters of late. Whereas any of the Spider-Man or Transformers films have tons of stuff going on, none of it meaning anything, The Half-Blood Prince boasts very little, yet those few events are of momentous significance. Of course, it has its flaws – simplifying the plot in a manner that makes some of the events and motivations a little mysterious, failing to make the film’s most important moment as emotional as it could be – but on the whole it’s a great film. The magic is mysterious, primeval and terrifying, and the character development is the strongest we’ve seen thus far.

Rather than simply putting the novel on screen, David Yates et. al. have carefully chosen elements of the source material to create their own vision for the Potter saga. I think it works admirably.

Harry Potter and the Half-Blood Prince