I hadn’t read Gillian Flynn’s bestselling novel, so I had no idea of the surprises in store when I sat down to watch David Fincher’s latest offering. Suffice to say that the film did not end up where I expected. 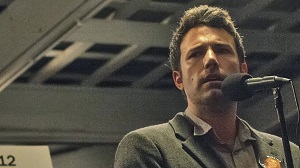 Nick’s wife, Amy, goes missing in mysterious circumstances. Very quickly, suspicion is directed at Nick himself. Did he murder her or did he not? It’s a simple premise, and the film starts out following Nick’s movements as first the police then the media get involved.

Fincher brings his usual cinematic style to proceedings. Even with the least impressive of Fincher’s films (step forward, The Curious Case of Benjamin Button), you know it’s going to look good. Here, together with his regular cinematographer, Jeff Cronenweth, he makes dull suburbia look beautiful. Trent Reznor and Atticus Ross are present on scoring duties for the third time although – like The Girl with the Dragon Tattoo – I don’t think the music would make for very interesting listening on its own.

Affleck delivers a fine performance in a role that demands our sympathies yet always leaves room for lingering doubt. We feel for this man and the predicament he’s in, but we can’t shake the nagging suspicion that he’s lying to us.

But it’s the supporting cast that really make this film something special. Flynn has written an astounding variety of roles for women, and it’s amazing – and depressing – just how refreshing an experience a Hollywood movie can be when the majority of the cast isn’t male. First and foremost is Carrie Coon as Nick’s twin sister, Margo. Most definitely The Next Big Thing, I immediately fell in love with her character, someone who was prepared to stick by Nick no matter what. 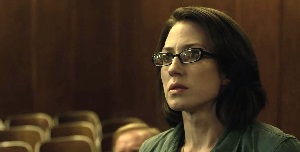 Then there’s Kim Dickens, who first came to my attention from her work in ‘Deadwood’. She plays Detective Rhonda Boney with brilliant screen presence. She’s up there with Frances McDormand’s Marge Gunderson in terms of Hollywood’s best female cops. Tyler Perry continues to pick up sporadic work outside of his own films and TV series, and his presence in Gone Girl brings some warmth and humour to proceedings, whilst Neil Patrick Harris has a lot of fun playing, well…creepy.

Then there’s Rosamund Pike as the missing Amy. She’s always puts in a good performance, but it’s her character I had the biggest problem with. There are no spoilers here, but suffice to say that the film goes in some unexpected directions, and some plot developments are a little hard to swallow.

The thing is, Gone Girl starts out as a deadly serious mystery/thriller. But then spends a lot of its second half trying to defy classification. Is it a comedy? A satire? A horror film? To be honest, I’m not sure. And as a consequence, I left the cinema feeling quite uneasy. Thinking about it now, part of me considers the film to be a masterpiece, another thinks that it’s a ridiculously unbelievable tale that not only defies logic, but makes claims that aren’t supported by the narrative. Abrupt changes in tone worked for me in Red State, but here I felt cheated.

This is certainly Fincher’s most challenging film since Fight Club. It may be super-long, but the time whizzes by, and there are half a dozen brilliant performances. It’s just kind of unsatisfying. And maybe that’s the point.

←Sin City: A Dame to Kill For Annabelle→